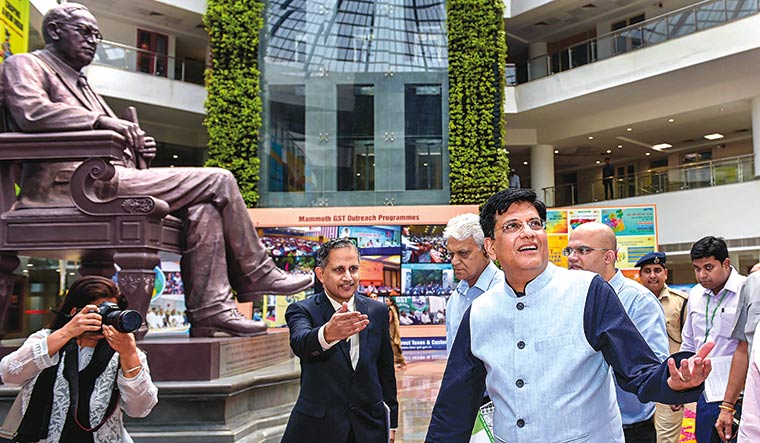 Big event: Union minister Piyush Goyal and S. Ramesh, chairman of Central Board of Indirect Taxes and Customs, at the ‘GST Day celebration’ in Delhi | PTI

THE LAUNCH OF the goods and services tax regime a year ago was a well-lit event in Parliament, which matched the enormity of the occasion. Its first anniversary, despite the glitches and complaints, was also a big occasion for the Narendra Modi government. The prime minister called it a ‘celebration of honesty’, conveniently forgetting that he had opposed GST for a decade when the Manmohan Singh government wanted to implement it.

The new indirect tax regime was slated to mark the beginning of India’s journey towards cooperative federalism—a system of decision-making which brought indirect tax out of the Union budget and amalgamated a number of other state and Union indirect taxes. Instead of either the Centre or states taking decisions on levies independently, the decision-making process became part of a Centre-states round table.

The Centre and states decided on the fate of taxpayers and businesses in the country at 27 GST Council meetings in the past year. The GST Council, which is the highest decision-making body in the tax system, is comprised of the Union finance minister, Union minister of state for finance and state finance ministers. As part of the new arrangement, the Union would receive a higher share (50 per cent, compared with 40 per cent of Central taxes earlier) of the collections from this amalgamated indirect tax, while states would get the rest, based on a formula.

Around 1.1 crore businesses registered to file returns under GST. However, at the time of filing the first returns a month later, there was a huge dip in the number of tax payers. “Many have registered, but perhaps still were not able to grasp the IT-related processes properly,” said Hasmukh Adhia, head of the GST executive body, while announcing the council’s decision to extend deadlines for filing the first return.

The deadline was later extended many times—till October, about three months after the rollout of GST. As anticipated from the initial assessment of returns filed, the collections were below expectations. A statement from the Union finance ministry this April said the total GST revenue collected between August 2017 and March 2018 was Rs 7.19 lakh crore. “For (these) eight months, the average monthly collection has been Rs 89,885 crore,” it said. A significant drop from the Rs 1 lakh crore revenue mop-up promised by the Centre to states.

To compensate states for their ‘revenue gap’, the Centre paid out additional compensation to states—Rs 47,844 crore through the current year. But, this is hardly a permanent solution. Observers say the relationship between the states and the Centre is already under stress. The frequency of the GST Council meetings, too, have come down—from twice a month till March 2018 to one meeting in two and a half months.

The next GST Council meeting is due on July 19. The difference in opinion between the Centre and states is becoming noticeable in a number of issues. Primary among these is simplifying the filing of GST tax returns. Another one is the issues related to the Centre’s wish to impose a sugarcane farmers’ due clearance cess on GST. Many states are against it. A proposal from the Centre of including natural gas under GST has also been opposed by many states.

“The consensus-building process cannot always run uni-directionally,” said Shashi Bhusan Behera, finance minister of Odisha. “There are aspects where the states had to come out to raise their voice.” Odisha had supported Andhra Pradesh’s opposition to the Centre’s proposal to include natural gas under GST. The move, Behera said, would further curtail revenues of his state. “The Council had earlier decided to keep petroleum and other energy products out of the GST purview. Following the switchover to the GST regime from value-added tax administration, the tax collection in the state has come down,” he said. 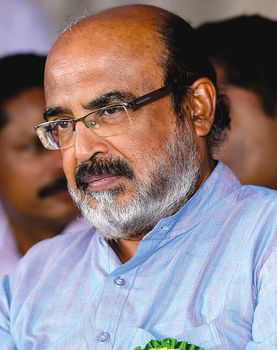 According to the estimates of the state commercial taxes department, Odisha was facing a net revenue shortfall of Rs 1,725 crore from the pre-GST state VAT collection numbers two years ago. The GST collections in the state had been progressively declining this year. However, Behera said, a saving grace was the Rs 2,300 crore Odisha received in compensation for this revenue shortfall.

Andhra Pradesh Finance Minister Yanamala Ramakrishnudu said the manner in which the Centre wanted to include natural gas under the GST ambit was “not correct”, as the proposal was not circulated to states for discussion by the GST Council prior to deciding on the move. “Being a producer of natural gas, our state will lose substantial revenue, as our ultimate consumption will be less than the production,” he said. “Our state had already lost autonomy in raising fiscal resources with the introduction of GST.”

The GST (Compensation to the States for Loss of Revenue) Act has projected revenue growth for states during the five-year transition period at 14 per cent, and the financial year of 2015-16 has been fixed as the base year for calculation of this compensation amount to states. States, however, are growing uncomfortable with the arrangement. “The annual tax growth rate under GST has fallen to 12 per cent, from 16 per cent the year before GST. This is primarily because states are unable to raise taxes like before,” said an official in the Rajasthan State Finance Commission.

The main complaint about GST is the “half-cooked” manner in which it was implemented. “It is still not completely ready,” said West Bengal Finance Minister Amit Mitra. “A number of processes, including verification of returns, is being done manually. This is leading to huge delays in release of returns to exporters. In that sense, GST after one year seems to be more primitive than VAT.” In the July 19 GST meeting, Mitra is expected to raise the issue of a backlog of Rs 25,000 crore refunds to exporters.

Kerala Finance Minister T.M. Thomas Isaac echoed the concerns about the poor IT readiness of the GST-Network. “We had hoped that with GST there would be higher revenue collections,” he said. “But, that has not happened. In fact, there are significant leakages in revenue.” He said none of the promised benefits of GST were visible after one year, and criticised the Centre’s suggestion for a cess. “Tampering with the GST rates by including a sudden cess on sugarcane could make the entire tax system even more counterproductive,” he said. “Why should states or consumers bear the burden of a Centre-announced package for sugar mill owners?”

Inclusion of petroleum products in GST has been a longstanding demand of Union Petroleum Minister Dharmendra Pradhan. States, however, are against it. “Even if petroleum has to be included, the Centre would have to agree to pay a higher compensation to states for their shortfall in revenue collections,” said Assam Finance Minister Himanta Biswa Sarma. “This may ultimately not help much in bringing down the prices of petroleum products for consumers.”

In a recent research report, rating agency CRISIL said there was ‘anecdotal evidence’ that many organised retailers and restaurants were continuing with the practice of accepting only cash for goods and services sold. The outgoing chief economic adviser Arvind Subramanian, too, had said that the GST Council was “acutely aware” of the fact that the complexity of the tax structure had reduced some of the potential economic benefits. Tax experts say that rationalising higher tax rates of 28 per cent and 18 per cent on a number of items and a complicated return filing system have discouraged tax payers. “The system is now slowly stabilising,” said tax attorney L. Badri Narayanan. “But, the pain points are not all gone.”

In September, when the annual audit of GST returns is likely, a number of new pain points are likely to become evident. However, the already revenue-stressed states and the Centre will try hard to keep the band together for its cooperative federalism mandate, and to ensure a better political climate before the 2019 Lok Sabha elections. 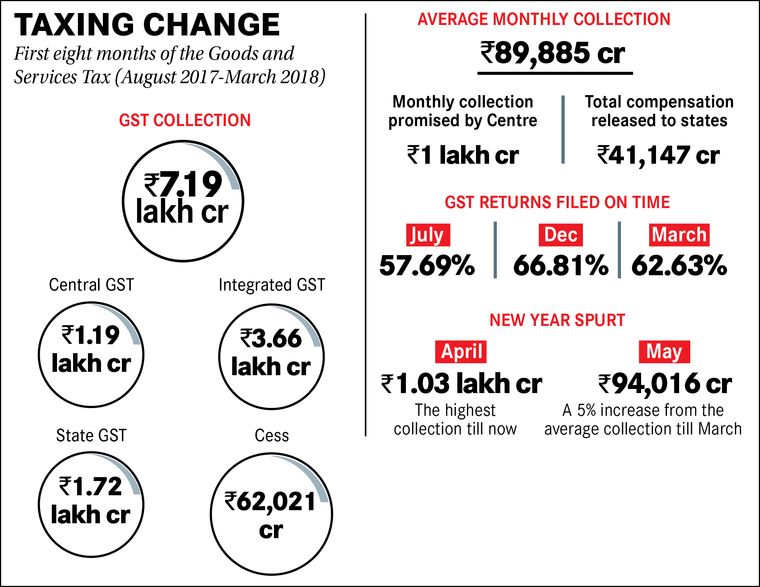