Sewage treatment plants are a must 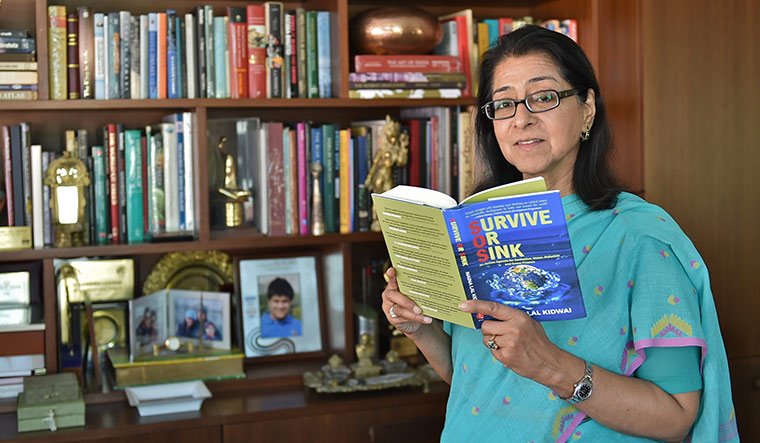 It is not uncommon to find corporate CEOs supporting a social cause. But, to have a former bank chief enthusiastically talking about faeces and its proper disposal takes things to a new level. Naina Lal Kidwai’s concern for sanitation came out of disgust for the way things were happening in the sector. At a conference in Stockholm, she felt embarrassed when India was lambasted for its poor sanitation. “As an Indian in the audience, it was awful to hear that,” she says. Her latest book, Survive or Sink, presents a practical approach to sanitation, waste management and pollution. The 61-year-old says it has been a fairly easy transition from the corner office in the HSBC headquarters in Fort, Mumbai, to checking toilets and open drains in villages.

THE WEEK met her at her sprawling farmhouse in Chhatarpur, Delhi—an island of calm, away from the din and bustle of the capital. The scorching summer heat stays outside her drawing room, a simple yet elegantly done space with ample natural light. Excerpts from an interview:

How would you rate the government’s Swachh Bharat Mission on a scale of one to ten?

Right up there—eight or nine, in terms of effectiveness. If you look at the delivery of toilets, it has gone up from 40 per cent to 80 per cent in rural areas. The criticism has been that people build it, but they do not use it. There are instances where people relapse. The good news is that there is lot of competition between districts and villages to be declared ODF [open defecation free]. A QCI [Quality Council of India] survey said that 22 per cent [of ODF] villages are not so, so we need to work with them. The target of ODF is an important behavioural change from just building a toilet to using it. The focus, now, is shifting to ODF plus, which is treatment. It would be one of the most expensive failures in history if all we do is to funnel the shit from the field into a toilet and back into the field.

What are the solutions to the issue of sewage treatment?

Treatment is a very big issue. Cities like Delhi treat only 30-40 per cent of the sewage. What we need are small FSTPs [faecal sludge treatment plants], prevalent in countries like Malaysia and Indonesia. A small RWA [residents welfare association] could build an FSTP. The government could subsidise it. The waste water can be used for horticulture and cooling systems. The solution lies in these distributed STPs. They are cheaper, quicker, effective, and would also create jobs.

What are you doing with the Indian Sanitation Coalition?

The Indian Sanitation Coalition works in the area of toilets, behavioural change and faecal sludge management. The purpose of the coalition is to get more people working on sanitation. We are trying to create collaborations between corporates, the government, NGOs and behaviour change experts. We also have a programme on micro-finance in sanitation, for toilet construction and repair.

That is one of the objectives of the coalition. There are many corporates who have signed up for the programme. Public sector companies came forward with the government’s nudge and they are now into it. Toilet building in schools was one way through which corporates got in. So far, 180 large corporates have joined, and they are spending through their CSR projects. We need smaller companies also to come in.

What drove you to sanitation?

HSBC has a £100 million water programme, where I learnt all that was happening with water. About 30 per cent of that money was coming to India. I was deeply fascinated by this whole space. I started the water mission at FICCI. But, you cannot look at water [problems] and not look at sanitation. I was a speaker for an event in Stockholm. In every session, 50 per cent of the discussion was about sanitation, and India would be talked about in the most disgusting terms. As an Indian in the audience, I wanted to disappear. So, I became interested in that space. Just before the government changed, a group of us got together and said that what we need is a coalition so that we can attract more people. Four months later, the prime minister announced [the Swachh Bharat Mission] from the ramparts of Red Fort. This was a godsend.

How easy or difficult was your transition from corporate India to a sanitation project?

That was the least of my problems. My husband has worked in the non-profit area for the past 15 years. My daughter and I have holidayed in rural places. We love wildlife. So, that is the easy part. It is exciting to see how beautiful some of our villages are. The constricted mindsets coexist with modernity.

We do not have enough women in corporate boardrooms. Are you mentoring women for that?

We are getting women board-ready. FICCI runs a programme to prepare women for corporate boards, and I am always available to help them. There are enough interested and capable women out there. Corporate attitudes are changing, but India is not where it needs to be. It is not so much about man or woman, it is more about the comfort level of having people you know. Guys mostly find peers in guys. The boys club in corporate boardrooms is changing, albeit slowly. When I joined the Nestle board, there was a Swiss lady who had joined seven months before me, and I was so relieved. A lot changed because of two women coming.

How do you look at the current banking crisis?

In case of ICICI, the investigation is still on. So, let us not impale someone before things are proven. There may be other facts which we are not aware of. What happened with Punjab National Bank was clearly an operations failure. Frauds happen everywhere, the issue is how we deal with them. We should have zero tolerance for this kind of failure.