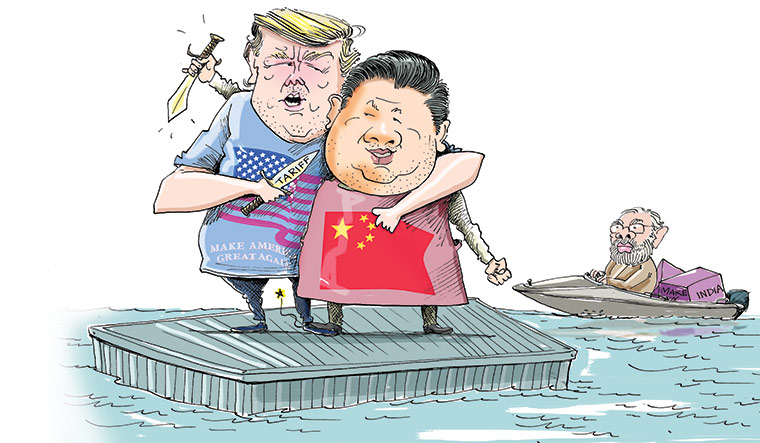 Over the last couple of weeks, the US has launched a number of trade missives, which can further undermine the already beleaguered global trading system. They came at a time when the system—not global trade per se—is undergoing one of its most testing phases in recent history.

First, the US imposed unusually high tariffs on steel and aluminium, on specious grounds of “national security”. Then, they threatened India with the filing of a dispute, the first by the Trump administration, at the World Trade Organization about our export subsidies. This happened on the very day United States Trade Representative appointed their ambassador to the WTO, Geneva, after a long hiatus.

While the European Union and China raised their voice against the US, about the imposition of higher tariffs on such a ground, India has not reacted. India will be at the receiving end on the first one as well.

Taken together, all this can potentially lead to a trade war. The WTO dispute settlement system is unlikely to come to a rescue. This is because, if the EU and China file a case against the US move on steel and aluminium tariffs and win it, the US will surely disrespect the judgement. On the other hand, if the US win this case, other countries will copy the move to protect their “national security” interests.

As far as India’s export subsidies regime is concerned, there is a strong chance that the US move will not pass muster at the WTO. However, it will be better for India to take a closer look at such subsidies to see how they can be made more non-product-specific, so as to enhance the overall productivity of our economy rather than just supporting a specific product group.

While it remains to be seen how such disputes will play out at the WTO, the fact is they have further undermined the effectiveness of the trade organisation as the custodian of a rules-based international trade regime. Now, this crisis has to be used as an opportunity to reform the WTO system.

There is nothing new in this call for reforming the WTO. Since the global financial crisis of 2008, a number of trade honchos—including immediate ex-director general of WTO Pascal Lamy—have said that one cannot run such a system in the 21st century with a 20th century mind-set. This is primarily due to the emergence of several new subjects, such as electronic commerce, on the trade proscenium.

Therefore, reforms are needed in at least two critical areas of the WTO’s functioning. They are: a) dispute settlement system, and b) modalities of negotiations. On the second, some progress has been made, as the ‘single undertaking’ nature of negotiations is all but discarded. It is now time to focus on the first. The WTO members should demand a special session to discuss necessary reforms to make its ‘jewel in the crown’ as effective as it used to be in the first decade of its establishment.

Where does India stand in this game? As compared with what it used to be at the time of WTO’s establishment, we have a much larger stake in the system now. More than 40 per cent of our economy is exposed to international trade. If we want to achieve a double-digit growth over a sustained period and create jobs, our external trade has to grow at more than 15 per cent a year. This is not possible in an uncertain trading environment.

Therefore, India should call upon all WTO members, including the US, to undertake a systemic reform in the above-stated crucial areas of the WTO’s functioning. In this regard, Union Commerce Minister Suresh Prabhu has made a good beginning in New Delhi last week when he called a mini-ministerial of the WTO members following the collapsed talks in Buenos Aires last December. Now, it is time for India to show similar leadership in Geneva, and make things happen for the benefit of the international trading system.