Neapolitans treated Maradona like a God, but not for long 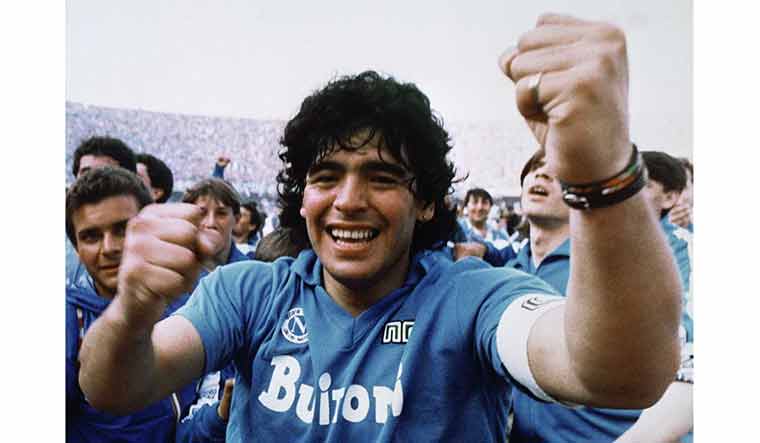 The city of Naples had it rough—one of the poorest cities of Italy reeling under financial crisis, a thoroughfare for drugs and treated as an outcast by the rest of Italy. The world of Neapolitans was turned tumultuous in 1984 when a 5ft 5in Argentine from the slums of Villa Florito in Buenos Aires arrived as their saviour. Football genius met a dysfunctional city and an unforgettable romance ensued. One that was never forgotten.

Diego Maradona is the latest subject of Oscar-winning filmmaker Asif Kapadia's latest documentary after his much celebrated success with Formula One racer Ayrton Senna and singer Amy Winehouse. The two-hour-film is embellished with archival footage, existing TV shots, public rushes juxtaposed with carefully placed voiceovers to add depth and context. The documentary deep dives into two lives, that of Diego—the humble, humane Argentinian who loves his family, who tries to cope with the new found fame, and Maradona— the skillful maverick who spent more time parading the night clubs of Italy and rubbed shoulders with the Italian mafia.

Diego Maradona is a gripping documentary and it has been put together well for both football fans and the uninitiated to enjoy. But the latter would be more likely to sympathise with Maradona as Kapadia takes them through his own glorified perception of the footballer. The close-ups of Maradona in tears and his helpless expressions veil his many flaws in the film—failure to admit to fathering a child for 30 years, arrogance to admit he is not in control of his lifestyle and getting his off-field antics affect his on-field performance. Kapadia also fails to discuss Maradona's connection to Che and Fidel, both of which were very prominent tattoos the footballer flaunted.

Diego Maradona opens in bravura style with a montage of shots of his playing career, an early ankle injury and a voiceover from Pele saying his successor wasn't 'psychologically prepared yet'. Maradona's unpreparedness is immediately thrown into light during his first press conference after transferring to Naples from Barcelona when a journalist asks him whether he knows what the Camarro (Italian mafia) is and how deep their influence is. The camera closes in on Maradona who looks quite stunned and baffled. His trainer Fernando Signorini is Kapadia's vital cog in the film. Signorini is the one who throws light on the dual personalities Diego and Maradona—the 'Mamma's boy' and the 'pariah' who came under extreme public scrutiny.

Apart from his own adulation for Maradona which sets the tone of the film, it is a gripping documentary which captures the persona of Maradona and how he did turn up as the saviour for Naples, leading them to their first Italian championship title in 1986-87, their second in 1989-90 and the UEFA Cup in 1989 among others. The film also captures two of Maradona's most iconic moments during his roller coaster career—the 'Hand of God' and the infamous run parrying a slew of defenders in his wake before netting the ball—both goals against England in the quarter finals of the 1986 World Cup. Kapadia sets up the 'cheat' goal as Argentina's payback for the Falklands war with Maradona sheepishly saying 'the linesman didn't see!'

The 1990 FIFA World Cup hosted by Italy marks the turning point in the film as well as Maradona's life, both on and off the field. Kapadia revisits Maradona's blunder in asking the people of Naples to support Argentina during their semi final clash against Italy in Naples. Kapadia packages the events from the time Maradona steps up to take the penalty, and the furore from Italians afterwards brilliantly to show Maradona's fall from grace and into social oblivion.

Diego Maradona portrays the dark side of celebrity status and how thin the line is between adulation and abjection. Over the course of two hours, Kapadia manages to capture the transition skilfully, albeit his own reverence for the star sets the tone in crucial moments.