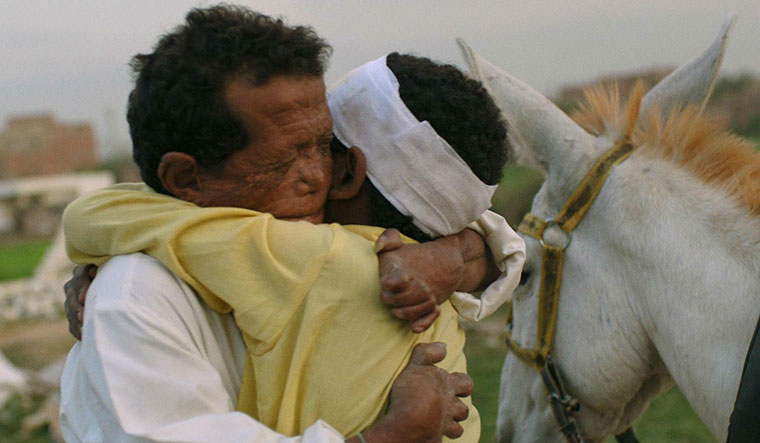 Bashay’s father abandoned him at the gates of a leper colony. For thirty years, he lived in a community of “sick people”. Though he recovers from leprosy, he is left with extensive scarring. He makes a living by selling trash. He finds peace and acceptance in his community. He finds love, too—in his wife, Iremy. However, Iremy’s death leaves a void in his life, and he sets out across Egypt in search of his family, defying the fears about the “big, bad world” outside. Accompanying him on this adventure are two of his loyalists—Obama, an orphan boy, and Harby, an ageing mule.

Directed by Egyptian-Austrian A. B. Shawky, Yomeddine (Judgement Day) is a compelling take on class conflicts in Egyptian society. It conveys how for the disabled and unprivileged residing in secluded areas, every day is judgement day. Rady Gamal, a leprosy survivor, plays Bashay, and Ahmed Abdelhafiz plays Obama. Punctuated with moments of sentimentality and humour in equal measure, Yomeddine is a thoroughly enjoyable, character-driven drama. The film won the Francois Chalais Prize at the Cannes International Film Festival. It was also the first indie film from Egypt to be nominated for the prestigious Palme d’Or.

Yomeddine holds up a mirror to the Egyptian society of yore, when cassettes were in vogue and stigma against leprosy was entrenched in the society. “I am a human being. What are you afraid of?” asks a shocked Bashay, when people refuse to share space with him. Though completely cured, Bashay’s pockmarked face and knobbly fingers give him away as a leper. Yet, Obama stays by his friend always. It is essentially the chemistry between Bashay and Obama that makes the film relatable. The film will have its commercial release in India on August 23.