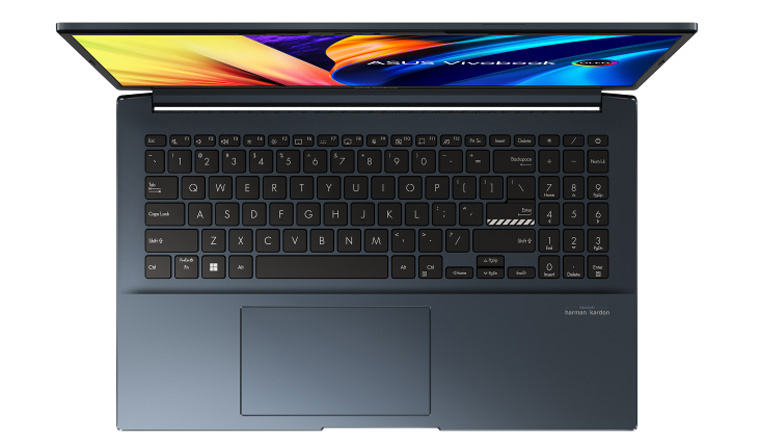 ASUS has been launching OLED laptops for a while, so much that the company wants to compete with an OLED-equipped display across price segments. The Vivobook 15 OLED K6500 is company’s multimedia and work offering at Rs. 89,990. Let’s try and see what if gets right and what it doesn’t.

Display: The laptop features a 15.6-inch (1920x1980) OLED with 100% DCI-P3 colour gamut range. It’s perhaps the best part about this notebook. The colours look vibrant, but not too vivid that you would have to change calibration. It’s bright enough to be used outdoors and does a good job of handling full HD videos and high-resolution images. It’s 16:9 aspect ratio display instead of a 16:10 that’s more suited for creators/video content creators. It supports HDR, so for streaming services, it can handle HDR content well enough, something a lot of mid-range laptops can struggle with at times.

Performance: Featuring Intel’s 12th gen. Alder Lake chipset i5-1240H octa core at max. clock speeds of 4.4GHz, 16GB of DDR5 RAM, integrated Intel UHD graphics plus nVidia GeForce RTX 3050Ti GPU, plus a 512GB PCIe 4.0 SSD, the notebook doesn’t lack on the internal hardware front too much. It runs on Windows 11 Home (22H2 version) OS with a couple of third-party programs pre-installed that can be removed as per the user’s preference. The machine handles day to day tasks, Web browsing with multiple browsers, Word document, and a video player in the background without breaking a sweat. For a game like Fortnite, you can expect playing it at 60FPS or so with no lags or stuttering. There’s 2x USB 2.0 Type-A ports on the left, a USB 3.2 Gen 1 type A port, a thunderbolt 4 (with support for 4K display & power delivery), an HDMI 2.1 port, 3.5mm audio jack and a micro SD card reader on the right side. Other than no LAN port, most users’ requirements should be met with this set of I/O in place. Oh, and there’s also a physical switch to turn off the webcam manually. Keyboard and speakers: The notebook features a standard QWERTY keyboard with a familiar set of function keys. The keys have got decent travel and feedback when typing quickly or for casual gaming. There’s dedicated number keys, a large trackpad that handles gestures and taps better than previous some of the Vivobooks for basic tasks such as multiple apps view, scrolling and switching between opened apps. For audio, there’s Harman Kardon speakers with an amplifier to for boosted volumes while taking care of distortion, providing a pretty clear and loud output for a laptop. It takes care of your media playback needs when you don’t have your earphones around.

Battery life: With a 70Wh battery unit that supports 150watt charging using the bundled charger, the notebook lasted around 5-6 hours on 30% brightness, WiFi always on, 3 hours of video playback, 20 minutes of gaming, and charged from 1% to full in 2-2.5 hours.

What doesn’t quite work:

Build quality: Vivobooks aren’t necessarily known for their build quality and design, and the Vivobook 15 OLED K6500 seems to follow that trend, too. Though the finish of the material seems okay, there’s a bit of give-in on the arm-rest area that can be pressed without too much pressure applied. The same can be said for the outer shelf at the bottom side. At times, when closing the metal lid, the hige produces a knock sound, though this doesn’t happen every single time, but still worth a mention for what’s otherwise a pretty well rounded Windows laptop.

Verdict: The Vivobook 15 OLED (K6500) has a lot of things going for it, which is needs to in this price segment that a lot of interested folks are interested in- to get work and entertainment, including a bit of gaming as well. The notebook has performance on par with most laptops in this segment, a great display, not-so-great build quality and okay battery life to sum it all up. If you are looking for a 15.6-inch Windows 11 laptop that is good enough for most use cases with a decent set of ports and headroom for performance.