The earbuds appeared nice to wear 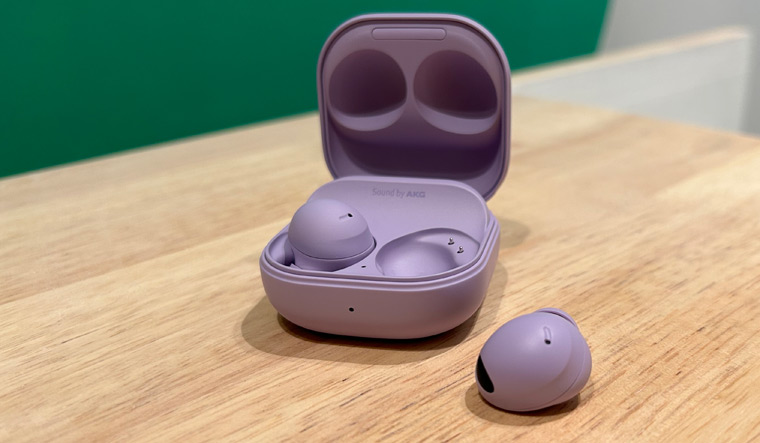 Samsung has been making inroads into the audio space for past few years, especially more since its acquisition of Harman. The Korean giant has been among the established names true-wireless earbuds (TWS) for a while now, and the Galaxy Buds2 Pro come as its new flagship audio offering at a price of Rs. 14,999. Let’s check if these are worth consideration list or not.

Design: The Galaxy Buds2 Pro come in a sleek and premium clamshell charging case that has a nice rubberized and gloss-free feel to it. The package is slim and not at all heavy, so you can carry it in your purse or even cargo pocket just fine. The case has the Samsung branding on the top (and AKG branding inside), charging indicator on the front, and a USB type C port at the back. The earbuds are bean-shaped designed and fit and latch on in the charging case as soon as you put them. The buds are matte and, again, gloss-free outside with smooth-textured plastic casing inside. The buds are a little smaller than the previous generation model. I found the buds to fit in-ear well and barely had to adjust when using them for long listening sessions. Weighing under 6grams each, the buds also appeared nice to wear and sort of stand out from many other TWS today, given the Bora Purple colour that I tried.

Audio quality and experience: The earbuds support Bluetooth 5.3 and come with SBC, AAC and Samsung Seamless Codec audio codecs, the last codec being exclusive to Samsung devices with support for 24-bit higher resolution audio but that didn’t seem to be of much use. The buds deliver full-ish bass and sharp treble, as expected from a Samsung wireless earbuds. You get somewhat deep sub-bass response as well as good mids, though upper mids can be a little too sharp at times. It handles vocals pretty well and has covered you for a a loud output on higher volume levels, if needed. The sound quality on the Buds2 Pro, to sum it up, is fairly well tuned, though perhaps not a clear winner. Active noise cancellation on the pair seems improved from its predecessor, with low to mid pitched sounds getting countered by the mics and microprocessors present though it clearly struggles with higher pitched noise coming from outside, which is expected from any TWS pair. If you have an Android phone, you can use a number of settings and the Galaxy Wearable app to check various EQ presets, but this isn’t available on iOS. The touch controls on the buds is usually responsive, it does catch your tap when you’re trying to adjust the buds but it doesn’t seem as hypersensitive as the previous Buds. Only occasionally did the buds stop playing when one bud was removed from ear, you have to take out both for it to stop, hopefully Samsung fixes this.

Battery and other stuff: Each bud has a 58mAh battery unit and the case has 500 mAh. The buds lasted around 5.5-6 hours plus 17-18 hours or so with the case, which isn’t the best we have seen from a pair of TWS but it isn’t too bad. One full charge takes nearly 2 hours in one go. Samsung also has a feature called Voice Support (same as Sony’s Speak to Chat feaure) where the buds go mute when you start speaking. Call quality on the Buds2 Pro is fin,e you’re able to hear the other person well, though your own voice can sound a little lower in volume to the other person than you might expect.

Verdict: Samsung’s latest Galaxy Buds have a lot of strengths, minor refinements over its predecessor and a few downsides, too. They offer okay-ishbattery life, have a fairly well-tuned audio quality, and show no connectivity issues with Android, Windows and iOS. At their price point, they have a lot of competition from the likes of Sennheiser, Sony and Oppo, but the Buds2 Pro can hold its ground, too, so if you are looking to have a pair of wireless buds to go with your Samsung device, the Buds2 Pro seem like a contender, with better multidevice connectivity and codec support that it would have with other devices.