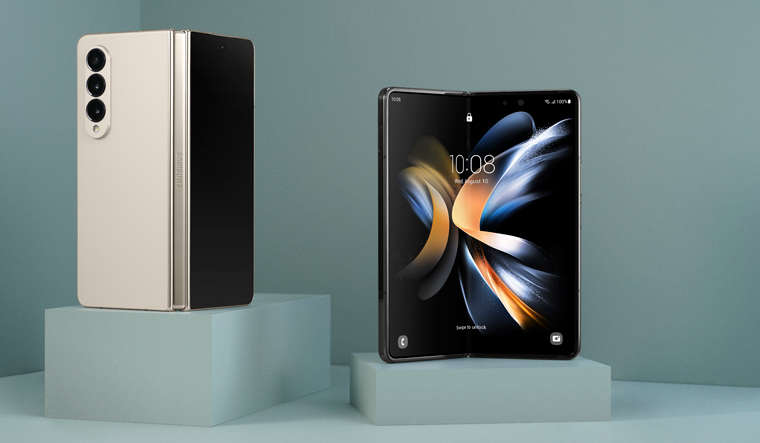 Foldables aren’t very new in the smartphones market today. We have seen the likes of Samsung, Motorola, Oppo and Xiaomi showcase their foldable display phones for a few years now, but it’s only Samsung that has received somewhat mainstream attention, it seems. With its fourth iteration, let’s see if the Galaxy Z Fold4 has fixed enough issues to justify that Rs 1,54,999 price tag.

Design: Make no mistake about it, design remains the main talking point here. The Galaxy Z Fold4 comes with an inward-folding 7.6-inch main display with a 6.2-inch cover display on the outside when folded. The main screen comes with a factory-fitted screen protector, and if removed, can be reapplied by visiting a Samsung store. The crease in the middle of the main display is still very much noticeable and you can feel whenever you touch or scroll on the screen through the middle. The phone weighs a little under 270 grams (top heavy), and is nearly 16mm thick when folded and 6.3mm when unfolded. The phone has aluminium frame and comes with Corning Gorilla Victus+ over the displays. The bezels around both displays are slimmer than before and the under-display camera on the main screen is also less noticeable now. When folded, your hands might run over the Samsung logo ingrained on the outside hinge every now and then. I tried the Beige colour and found the overall look and feel to be premium, it can be a little but not too slippery that we haven’t seen on smartphones before. The fingerprint scanner and volume button sit on the right side, and the scanner is really responsive and dependable for daily use. The device folds and unfolds not in an instance and understandably so. The device is IPX8 water resistant, which isn’t common in the foldable space.

Displays: The 6.2-inch cover display, with an aspect ratio of 23.1:9 (2316x904) HD+ AMOLED display, supports adaptive refresh rate of up to 120Hz. This display is a little narrower than many smartphones’ display these days and it might mean having to adjust a little when typing messages. The display, though, is really bright with punchy colours. It’s usable under direct sunlight, too and handles high resolution videos well. The main display is a 7.6-inch QXGA+ (2176 x1812) AMOLED that has an aspect ratio of 21.6:18 and up to 120Hz adaptive refresh rate. The display is slightly brighter than before and the upgraded aspect ratio means less letterboxing when watching videos but you do still get big black bard on top and bottom when playing a video. The display is sharp, vibrant and smooth when it comes to refreshing frames when scrolling inside apps.

Cameras: The rear camera setup includes a 50MP (f/1.8) main camera, 12MP (f/2.2) ultra-wide camera, and a 10MP (f/2.4) telephoto camera. Both the displays have a camera, too – the cover display has a 10MP (f/2.2) punch-hole camera, and the main display has an under-display 4MP (f/1.8) camera. You can use the main rear cameras for taking selfies when the phone has been unfolded while checking the shots and live view on the cover display (Samsung calls this Flex mode), nice use for the displays. The rear cameras protrude quite a bit, and their actual shots seem vibrant and detailed. The low-light shots appear better stitched than the previous model. Even the telephoto performance, which is often an afterthought in most smartphones, can take decent shots in daylight. The shots could look to have a Samsung style to it, if you have used a Samsung smartphone before, but it isn’t necessarily a bad thing. Overall, the camera delivers most of the time and can be used in various lighting conditions.

Performance, software and experience: The Samsung Galaxy Z Fold4 runs on OneUi 4.1.1 based on Android 12 with the July security patch installed. The phone is equipped with the Snapdragon 8+ Gen 1 chipset along with 12 GB LPDDR5 RAM of storage and 256GB of UFS 3.1 storage. The phone handles daily tasks without breaking a sweat. Apps open and close smoothly, no noticeable stuttering in playing videos. It handles games like Apex Legend well, too, though that aspect ratio may not be well handled by every single game. The phone doesn’t heat up frequently, only a few times did I notice the camera area heat up a little when shooting videos or watching videos for a while. Coming to the foldable experience, whatever you have on the cover display continues on the main display once you unfold the phone. When you go back to the cover display from the main display (after folding the device), the phone treats it as locking the device, so you have to resume the task after unlocking the screen. The main display has a taskbar at the bottom now, which can be used to open more than one app at once on your screen. OneUI seems to gel in well with edge cases for foldables and I didn’t notice any corners cut when it comes to apps performance. There’s plenty of customisation options – from colour palette to match your wallpaper and themes to changing icons and changing always-on screen style from the theme store. The fingerpring scanner can also double up as a notification checker by swiping down to bring up the notification pane. Other things include double touch to turn off the screen, setting vibration pattern to the ringtone selected, and Windows connectivity and the DeX mode, there’s a lot of things in place. The best use cases for unfolding the device -- when viewing a document from your Email, could be a Word Document, PDF of an Excel spreadsheet, the main display comes in really handy. Typing experience on it isn’t very comfortable, though, despite the keyboard divided into two parts for two-hand typing. I used the cover display for like 80 per cent of the times and only rest the main display (mainly for the rear camera, watching videos and viewing images and documents).

Battery: The Galaxy Z Fold4 is powered by a 4,400 mAh battery unit with support for 25watt charging speeds. Do note, you don’t get a charging adapter in the box, yup, despite that price tag. The phone lasted around 23-24 hours most of the time on adaptive refresh rate and always-on display enabled, and takes about 90 minutes to charge from 1 per cent to full. The phone heats up just a bit when charging to full in one go, but nothing alarming. It supports wireless induction charging as well as Wireless PowerShare by which you can charge another device that supports wireless charging by placing it on the Fold4’s back.

Other features: The phone supports WiFI6 and Bluetooth 5.2 with LDAC support. There’s VoWiFI support as well, which works reliably and so is the call quality whether outdoors or indoors, nothing to complain there. The stereo speakers on the device are quite loud but I expected them to deliver a punchier and fuller sound, especially considering the size of the device.

Verdict: The Galaxy Fold4 shows Samsung’s attempt at polishing edges and fixing bugs with its fourth iteration of foldables. It’s a well-rounded foldable Android device that performs most things well and its foldable design provides a number of use cases without hampering regular tasks expected to be taken care by a smartphone. The fact that Samsung advices you to keep a screen protector tells you that we might still be a little away from more foldables going mainstream. If you have the budget and aren’t going to be using your smartphone out in a field every day, you can consider this Fold, it’s right up there among the best foldable phones today (albeit not much competition for now), but if you don’t fit the bill on either of those counts, you might want to wait a bit more for your first foldable smartphone.