Chromecast with Google TV: Is it really worth buying?

The streaming device that helps you do more with your TV 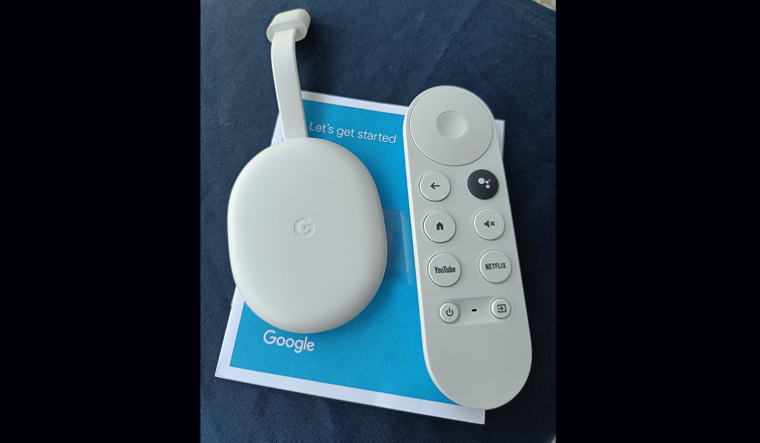 Chromecast with Google TV gives you an ovular-shaped dongle that attaches to your TV’s HDMI port (HDMI 2.1 supported) and there’s a remote control that’s pretty lightweight and smaller than most TV remote controls today. You also get a charger, USB type C cord and two AAA alkaline batteries in the box. The device sports a USB Type C port and can be powered by your TV’s USB port but it’s

recommended to power it using the charger plugged in to a power outlet since the USB port’s output may not be sufficient enough at all times. It also has a small LED to notify power status. The remote control has dedicated keys for YouTube and Netflix. The YouTube key can be reconfigured for YouTube Music or YouTube Kids. Other keys are the volume buttons (on the top right side), back button, Home button, mute button, Google Assistant, input switch and power key. There’s also a mic on it for voice commands and of course the Infrared port on the top. You should ideally insert  the Chromecast in your TV’s HDMI eARC port for audio passthrough and volume controls. The initial setup is not so complicated using the Google Home app (on both Android and iOS).

The Google TV UI is mainly based on your streaming apps and content discovery. It’s divided into Search, apps and content for you, Movies, Shows and all your apps library. A dedicated tab for all apps here might have been better than going into the Apps tab and then scrolling to the All Apps tab. The For You tab shows you content that you might be interested in based on your previous watched history from your signed-in apps. This doesn’t show which app has what but is more focused on the content grouped with respect to genres. Library tab shows you your purchased shows and movies from Google TV. The Search tab on the extreme left is for universal search for apps and content. You need to use the keyboard (or your phone’s Google TV remote) or press the Google Assistant for voice search or open an app with a voice command, which you can do at any part of the OS using this button. As usual, you can double press the volume button to mute (or simply press the mute button itself once).

The Chromecast is powered by the Amlogic S905X2 chip along with 2GB of RAM and it comes with Google TV based on Android TV 10 version with the May security patch installed. Performance on the Chromecast with Google TV is generally responsive and smooth enough. It’s definitely smoother to surf through than a lot of budget Android TVs launched in the past year or so. Very rarely, it struggled to handle switching between two apps. Loading of apps, too, doesn’t take unusually long.

The device supports 4K HDR10+ and Dolby Vision for videos and Dolby Atmos for audio provided your TV supports these formats and so does the service you’re using. The output for 4K HDR seemed really nice and didn’t show much graining or jarring effects. At times, the output from Chromecast with Google TV seemed a little brighter with punchier colours than the TV’s own default output with Android TV baked in. For sound, I couldn’t make DTS to work but Dolby Atmos and sound output in general seemed to be on par. You can connect Chromecast supported audio devices using the Google Home app. Power on/off also works fine, meaning you wouldn’t have to use the TV’s remote control, including for switching the TV input to Chromecast from the default input mode of the TV once you switch the TV on. The Chromecast feature, from your phone or tablet, itself works just as you would expect. But, if given an option, I would definitely suggest use your apps or streaming directly from the device instead of casting from another device for better audio-video result, especially with how straight-forward the bundled remote control is. For search, where you voice command isn’t working, you can use a remote app like Google TV Remote (or from a dozen other apps available in the Play Store) to input relevant search words on the Chromecast with Google TV.

The Chromecast comes with only 4.4GB free storage space (8GB model), so if you are installing a lot of apps, you might require an external storage drive, but for, say, 10-12 apps installed, it might well be sufficient. Google Tv does support adding more than one Google Account to Chromecast but as of now it has not been rolled out here, or at least not for the unit I tried. But you do have kids profile (linked to your Google Account), where you can add and make a kids profile for restricting certain apps, total time spent on apps, or content being viewed under that kids profile.

The device’s biggest competition seems to be Amazon’s Fire Stick 4K, which is already a known name in the and is priced similarly is Amazon’s Fire Stick 4K Max. The Fire Stick 4K Max very similar video and audio format support and has almost all apps from streaming services (it’s still built on Android TV, after all). It has a longer and a somewhat less intuitive remote control, though, but performance in general is pretty much neck to neck with the Chromecast. If you prefer Alexa integration and don’t have a lot of content purchased on Google TV/Movies, the Fire Stick 4K Max is a nice option, but you are used to Google’s take on Android TV with Google voice search built-in, or have an old non-smart TV or even a budget smart TV that isn’t very smooth to scroll around with and have a lot of

Android devices at your place, with which Chromecast anyway pairs up well, considering the Chromecast with Google TV makes a lot of sense for the biggest screen in your house.