Review: Realme Narzo 50 Pro 5G is a fine performer on most counts

Realme has been among the fastest growing brands in the country 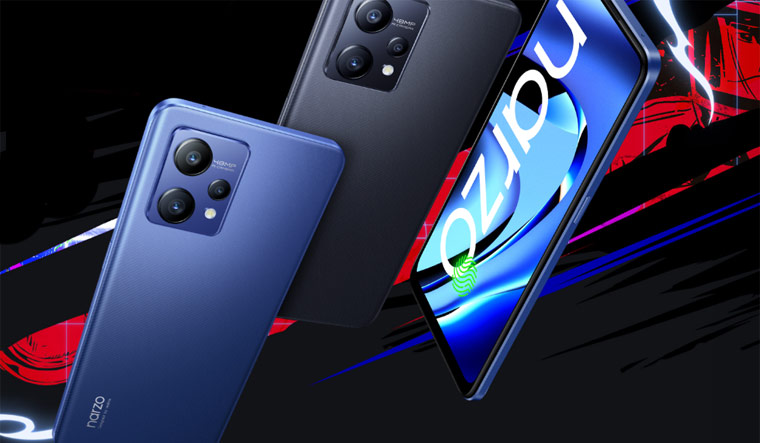 Realme has been among the fastest growing brands in the country and not just in the consumer electronic space. The company -- with is value for money devices, availability of phones across several price segment, and also venturing into smart TV sticks and audio products – has seen a big growth rate since it launched its first smartphone in India four years back. With the narzo series, realme is generally seen to be targeting 10,000 to 25,000 proce segment. Let’s try and see if the Narzo 50 Pro 5G does justice to its price tag, which is Rs. 23,999 for the 8GB + 128GB variant (21,999 for 6GB + 128GB).

The Narzo 50 Pro sports a 6.4-inch AMOLED diplay on the front with Corning Gorilla Glass 5 on top, the display also has a punch-hole for the 16 MP front camera on the top left as well as the in-screen fingerprint scanner towards the bottom. The phone, weighing around 180grams, has curved edges and slightly curved sides towards the back and is comfortable to carry around. The back sports a protruding glossy triple camera setup, the narzo branding near the bottom and has textured plastic back, which doesn’t feel cheap at all and isn’t a fingerprint magnet either. The buttons on the sides, though, they could have been done a little better as tapping them does give an impression that some cost-cutting was done (howsoever small it might be). The bottom houses 3.5mm audio jack, primary mic, speakers (other part is with the in-ear speaker), USB Type C port; while the top only has the additional mic.

The device’s 6.4-inch full HD+ (2400x1800) Super AMOLED display sports 90Hz refresh rate and is plenty bright even when used outdoors. It handles high resolution videos and images relatively well and does a fine job of rendering text as well. The in-screen fingerprint scanner is not that bad, it works fine when compared to other smartphones even at a somewhat higher price range. It isn’t the fastest I have tried but it’s really not bad for the price tag.

On the back, there’s a triple camera setup – 48MP main (f/1.8) camera, 8MP (f/2.2) ultrawide camera and a 2MP macro mode. The camera can produce relatively well lit and colour accurate photos in outdoors when un daylight. Moving subjects can be a little harder to capture at times, though shutter lag isn’t too high. In low-light, the camera, both 48MP and 8MP ultrawide do struggle to not give grainy shots. There are skin retouch options, too, which can really alter the output especially for bokeh modes. For video, you can shoot 4k videos at 30FPS and 1080p at 60FPS, and 1080p 60FPS is done quite well, giving detailed video if the phone is held still and in decent light, otherwise it can kind of struggle to give out a sharp video with no grains. On the other side, the front-facing 16MP camera is quite capable of taking detailed and vibrant shots. It also includes filters and quick settings while taking your shots.

On the battery side of things, the device boasts a 5,000mAh battery unit and comes a 33watt Dart charger in the box. The device lasted about a day more often than not during the usage. This was with brightness set at around 35% most of the time, around 45-50 minutes of calling, an hour of videos, two Email Accounts always on sync. Charging it from 1% to 100% took around 70-80 minutes, which isn’t painstakingly long.

Powered by MediaTek’s Dimensity 920 chipset (2.5GHz dual core + 2GHz six-core and Mali G68 GPU) along with 8GB of RAM and 128GB of UFS2.2 storage. It runs on Realme UI 3.0 based on Android 12 with the April security patch. The phone handles day-day-tasks without any trouble. Scrolling is mostly fine, switching between Home screen, using dual apps with floating windows or playing music alongside, the phone didn’t show any lags or stuttering. The 90Hz refresh rate also helps the cause. Realme also seems to have improved its RAM management where apps can now be resumed from where you left using them from a while back instead of having to start from somewhere else. For gaming, the phone tends to get a little hot but not too much that you would have to worry. On the software front, you can choose different icons and themes from the theme store, choose different colour schemes and icon shapes for things like notification pane from Settings. You can choose to have app icons show notification dots or number when placed on Home screen, too.Intead og on-screen navigation keys, gestures can also be enabled. The overall look and feel of the OS is quite different from stock Android (which is expected) and familiar if you have used a Realme device before. For the lock screen, you can select if you want Google Assistant or Glance shortcut, and Glance is where things get a little annoying. Even if you have not selected the Glance shortcut, nor have you switched on Glance for appearing on lock screen, every now and then, you would still get Glance content on your lock screen and being asked to check its content. Glance is basically a platform ad-content push and is seeing a lot of traction on smartphones and soon to be launched on smart TVs, too. Otherwise, most of the pre-loaded apps can be uninstalled and there’s not much wrong with how the OS behaves.

Dual stereo speakers (one at the bottom and one located with the in-ear speakers) do a really good job of handling multimedia content. They are loud, deep and usually don’t distort. Call quality and network reception (4G LTE and VoWiFI) on the phone are top notch. You can use both SIM card over 5G (many bands are supported, but there wasn’t any way to try 5G, still. I tried using the phone for audio with a pair of wireless earbuds and didn’t find any glitch or pairing trouble over Bluetooth. All in all, the Realme Narzo 50 Pro 5G is a fine performer on most counts – display, battery and build quality. Meanwhile, it doesn’t exactly standout when it comes to its camera performance or preloaded apps behaviour, and considering the competition from the likes of Moto, Vivo and Xiaomi, it can be a stiff contest. But if you need a 3.5mm audio jack, 90Hz display and dependable battery life on a smartphone under Rs. 25,000, the Narzo 50 Pro 5G can make it your checklist.