This is Raza Mir’s first novel. But it will not be his last. Plotted over a decade ago, Murder at the Mushaira arrives at the beginning of a year that has the unbearable weight of defining the new normal. Mir’s book, a historical thriller with Urdu poet Mirza Ghalib as an amateur detective, is a joy to read.

It is close to midnight in New Jersey when Mir gets on a Zoom call to speak to THE WEEK. Speaking from his booklined workspace that he shares with his wife and two kids who attend school virtually, Mir is perky and alert. The book has already garnered seven offers to be adapted into a film. “There was a book that came out titled Abraham Lincoln, Vampire Hunter (2010),” he says. “Reading the title of the book crystalised something in me that maybe I could use a character I knew something about and turn him or her into something else. Ghalib was a character I was becoming familiar with.”

Vividly described and richly imagined, Murder at the Mushaira is set in May 1857, just before the match is lit for the first uprising against the British, which is sumptuously told. Sukhan Khairabadi, a “poor poet” and a British spy, is found stabbed to death in Iftikhar Hasan’s haveli after a mushaira. The investigating officer, Kirorimal Chainsukh, is young and in a spot because the British are jittery with the murmurs of unrest brewing in the ranks. He chooses to enlist Ghalib’s help to navigate the world of mushairas, shayars and Dilli nawabs. A delightful journey into 1857 India with its snobbery, flavour, customs, history and colour, the book reads like a thriller but is written like a ghazal.

“If you are into Urdu and poetry, there is no way to avoid Ghalib,” he says. “It is a very weird and unnecessary fact, but Ghalib died the year that Gandhi was born. Having an understanding of nationalism, I thought Ghalib lived through this period… [in which] colonialism not only lost its dominance but also its legitimacy. Sahir Ludhianvi had written the poem Gandhi ho ki Ghalib ho. I made the connection in my head and I can see Ghalib as the character proceeding through the country’s history.”

Each chapter of the book begins with a verse from Ghalib. The poet makes the perfect guide to understand 19th century Delhi at the decline of the Mughal empire, the shift of power towards the British and the gradual fading away of the genteel world that once was. Mir grew up in Hyderabad with Urdu poetry, and so he conjures up the flavour of Ghalib’s city vividly. Though written in English, it has the feel and depth of Urdu.

Filled with colourful characters, it is easy to sink into his world—to imagine the mushaira, catch a waft of biryani and taste the sweetness of the mangoes that Ghalib craves. “I had plotted my [next] novel in the 21st century, but the publisher said, ‘I want one more, if there is another historical novel in you.’ I hope that I will write another one and go back to contemporary times.” There are books that you want to hold on to and never wake up from. Murder at the Mushaira is one of them. 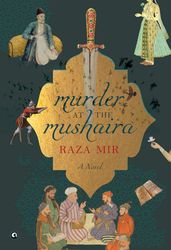 Murder at the Mushaira