All sparkle, no spunk

Never judge a book by its cover is a maxim for anyone who is serious about reading. Priyanka Chopra Jonas’s memoir Unfinished is, however, the exception to this principle. On the cover, her name in bold and her picture loom larger than the actual title, making no pretence about what lies inside: a brand with flash and little else.

The book is vain, vapid and, worse, dull. In the past few years, memoirs have acquired a much coveted place on a publisher’s list. Always in-depth, often revealing, even the reluctant politician has realised that to sell, you must tell. No longer just an air-brushed Insta version of life, a book with meat has almost become a rite of passage for a celebrity. Everyone does one. Sharon Stone is writing one. Karan Johar’s sold briskly. Chopra’s, however, is like seeing glossy holiday pictures on Facebook. Captured carefully, where the lighting is great and everyone looks happy.

A superstar actor, Chopra has displayed spunk in her acting, but her memoir offers none. It is also written for an American audience. Chopra helpfully explains why she stayed with her grandparents when she was young, and with her aunts and uncles while in high school in America. “I know this may seem strange to some, but it is simply a cultural thing. In India, taking care of one another’s children is just part of who we are. It is seen as duty and a responsibility, not an imposition,” she writes. Her explanation of India—a sort of tweet-style simplification—is peppered through the book. There is also the not-so-subtle message of gender disparity, which she weaves in as a UNICEF Goodwill Ambassador.

Unfinished focuses heavily on Chopra’s growing-up years, her relationship with her father, her family life, being sent to “sort of Ivy League boarding schools with a touch of posh finishing school” to learn discipline and the Miss World experience. She also describes her American high school experience where she hid a boy in a cupboard—her only description of her love life apart from that with husband Nick Jonas.

Her growing-up years are brought alive in minute detail, but again, the story is told through rose-coloured glasses. As is the first step she took towards becoming a celebrity—applying for the Femina Miss India pageant. The call to come to Delhi comes at a time when she is to take her pre-board exams. No one quite knows how to tell her father. Till her mother comes up with a plan—to put on some music, be nice and open champagne. “Champagne was always involved whenever Mom had to convince Dad to agree to something, and this night was no exception,” she writes. Growing up in 1990s India, where coffee shops were still rare, champagne on demand seemed like a fairy-tale existence. Yet, Chopra’s story has this dreamlike quality of an escapist Bollywood film of the past.

Her career in the Hindi film industry, too, is firmly in the safe zone, with no names and no juicy details. Her stand against sexism and her career highlights, like Barfi, have been barely mentioned. Her acting in Quantico is fleshed out in more detail. In the long list of people to be thanked, she names not one co-actor. She does thank filmmakers who have shaped her. For her fans in India, it is deeply disappointing. But for those who are beyond just her fans, Unfinished lives up to the title. It does not do justice to an actor who has ambition and a real story to tell. 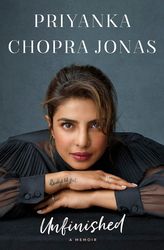