Shabnam Minwalla is an amazing writer. So much comes through in each of her sentences—detail, description, research.... Above all, she puts her soul into her writing. So, when she writes about Colaba, that southern nub of Maximum City—that little corner where her world begins and ends, even though she may have travelled far and wide—one knows, even before opening the book, that it will be an intense read. She knows this place, and how.

Colaba is that Mumbai locale which is so quintessentially Mumbai. It is from where the BEST's Bus No 1 plies. It is sometimes wrapped in the past—with those old houses with Italian-tiled floors and ancient lifts and ancient people who are still dressed in styles from the 1970s and 1980s. Yet, it still remains one of the most happening places in the city, even though the action may now have shifted to the queen of suburbs, Bandra, and beyond. It retains top spot in every tourist's itinerary, and has the most recall value internationally, for both good and bad events, the last being the terrible 26/11 attacks, where three Colaba spots—the Taj hotel, Cafe Leopold and Nariman House—were targeted.

Minwalla's book has something special for every reader—history and legend for the passing tourist, and what might be surprising discoveries for the veteran Colabawallah. On the one hand, this is a personalised account of her family's Colaba roots, and on the other, she shows how intrinsic Colaba has been to global developments, even perhaps influencing history. Like it did when Winston Churchill got injured at Sassoon Docks, resulting in him using a pistol instead of a sword in the Battle of Omdurman in Sudan, which saved his life.

As interesting is the number of well-known figures who have lived in Colaba at some point. This includes Mohammed Rafi; Kawas Nanavati (whom she refers to as the most famous Colaba killer); Ramaiah Naidu, who helped set up the Tata Memorial Hospital; his daughter, actor Leela Naidu; and her husband, poet-author Dom Moraes. Minwalla also writes about the people who were part of her life—teachers and tailors, for instance—whose stories add colour and detail to the Colaba mosiac.

Even though the book is an engaging read, there is something the reader would crave, especially one like me, with a naval background. Minwalla's Colaba chronicles stop at the beginning of the military station, though she does touch upon some landmarks there—like the Afghan Church and the Parsi Agiary. The naval community, however, adds much of the colour and variety to Colaba, giving the locality two added dimensions—its continuing maritime and military importance. She has also given a miss to the infamous Geeta Nagar slum, which gave Shabana Azmi one of her first brushes with activism. She has not even mentioned the Naval Kindergarten, said to be Asia's largest. Or the weather station and the famous football-shaped radar atop a residential building. And while she has described the residents and buildings of the Causeway in detail, she has barely craned her neck upwards to comment on the Adarsh building scam. Then again, this is a personalised book. Where Minwalla leaves off, another Colabawallah could pick up the story. Or perhaps, she could think of another book? 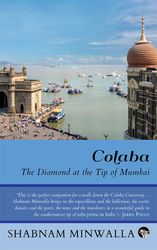 Colaba, The Diamond at the Tip of Mumbai