At nearly 1,000 pages, Troubled Blood is a wrist-breaker. And the longest you get to spend with the author’s famous characters—private detective Cormoran Strike and his assistant, Robin Ellacott. Still, one wonders, is it a tad too long? J.K. Rowling, writing as Robert Galbraith, loves stories with diverse characters and side-plots. Her latest is cluttered with them. Each character, even the minor ones, are etched out in great detail with elaborate back stories, even if red herrings.

It all starts with a cold case. At a pub in Cornwall, a woman asks Strike to find out what happened to her mother, Margot Bamborough, a doctor and former Playboy Bunny who disappeared 40 years ago. Bill Talbot, the first investigator in the case, was attacked by the serial killer Dennis Creed, who tortured and murdered several women. Margot’s daughter, Anna, was only a year old when her mother disappeared. Now, she wants closure. Anna’s partner Kim—this is the first time Rowling is introducing a lesbian couple, after facing flak for her comments on the transgender community—is not too keen. Strike, too, is hesitant, what with the cold trail, dead witnesses and an imprisoned Creed.

You do not turn to Rowling for fast-paced thrillers. Her stories are for those who love wonderfully eccentric characters and rambling plots, but even for the most enthusiastic Rowling fan, this book is tedious. The messy lives of the characters and the different threads in the story are too much to keep up with. The thrill of the first two books in the series, including the delicious chemistry between Strike and Ellacott, fizzles out in Troubled Blood. They spend most of their time bickering or being grumpy. Consequently, instead of a sinfully-satisfying experience, Strike’s fifth outing is a let-down—not fun, frothy or eminently sinkable. 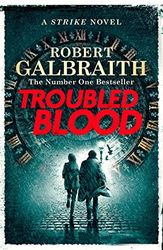