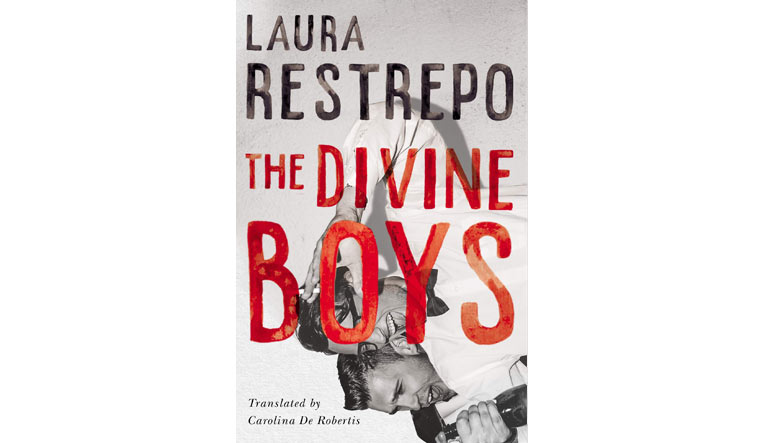 The Divine Boys (Los Divinos in Spanish) is the story of five boys who form a gang called Tutti Frutti in school. The boys—Muñeco, Tarabeo, Duque, Pildora and Hobbo— are into pranks, games, alcohol, drugs, girls, and the nightlife of Bogota.

Inspired by “One for all and all for one” they have a pact “One for Tutti and Tutti for Frutti”. Their common code: Worship of drink, the dominance of females and scorn for the weak. They carry on their boyhood bonding even in their thirties by getting together to relive the nostalgia and push the social boundaries.

The hero of the gang is Muñeco, also known as Mi-Lindo, Ken and Baby-Boy. He is handsome, wealthy, athletic, stylish, charmer, talker and party animal. He is short-fused, prone to rages and gets into brawls ending up sometimes with black eyes and broken bones. His appetites grow wild and twisted. After having exhausted a vast repertoire of sexual deviations and perversions, he goes after a little girl, rapes and kills her. He seeks the help of his brotherhood to help him out after the crime. But he is caught and convicted.

The other four members of the brotherhood are: Tarabeo (aka Dino-rex, Rexona, Taras Bulba) is a playboy and master of the art of seduction. He makes plans and decisions for the group. He and Muñeco are known as the Divine boys; Duque (aka Nobleza, Dux) is a perfectionist. He is the wealthiest and has a country home where the Tutti Frutis meet for poker and drinking binges; Pildora (aka Pildo, Pilulo, Dorila) is the errand boy. He does whatever he is asked to do: shopping, driving, picking up things for others and supplying party drugs to the gang from his mother’s pharmacy; Hobbit (aka Hobbo, Bobbi and Job) is an introvert who is into literature and has a phobia against physical touch by others. He does not belong to the rich class of the other four. But the others take him in for his complementary qualities missing among themselves. There is a girl who joins the boy's group occasionally. She is Alicia (aka Malicia), the girlfriend of Duque but she has a secret affair with Tarebeo and flirts with Hobbit.

Laura Restrepo, the author makes the characters come alive with her graphic descriptions and elaborate narratives. She develops each character with their own phobias and fetishes, craziness and creative talents, inner demons and outer appearances. She describes how an individual is shaped as a monster in brotherhood gangs. She gives a glimpse of the Colombian society through the adventures and circumstances of the characters. Hobbit exclaims, “This country of ours has had so much war—so very much, borne for too long a time—that we the living have grown inured to it”. Colombia has suffered so much violence and death from ideological conflicts, guerilla wars and drug trafficking. Much more than any other Latin American country.

The only disappointment is that after building up the characters and the story so steadily and elaborately, the author finishes the novel fast at the end. The reader who is settled in for a long journey is woken up and asked to get off the train before the imagined destination. But I had enjoyed long fantastic journeys in her other novels such as Leopard in the Sun, Delirium, The angel of Galilea, The dark bride and Too many heroes.

Laura Restrepo is a gifted writer and guide to Colombian and Latin American society. Her works are not just pure imagination. Some of them are based on her own political experience and personal witness to violence, crime and wars. She combines the facts and fiction seamlessly and creatively in her novels. Her life is as interesting as her fiction. She has seen life from different angles as an academic, journalist, political leader, member of the guerrilla movement, writer and novelist. As a journalist, she was in the frontlines covering the US invasion of Grenada and the Contra war in Nicaragua.

When she was working for a Colombian TV channel, she wrote the script for a miniseries on the theme of a deadly feud between two families involved in drug trafficking. But the channel did not air it since they received the visit of a lawyer who " mentioned about blowing up the office building of the TV channel"

In1982, President Betancur of Colombia nominated Restrepo as member of the commission to negotiate peace with the M-19 guerrillas. She received death threats after voicing her loud opinions and comments on the peace negotiations and the guerrillas. She was forced to go on exile to Mexico for six years. During this time she wrote the novel " Isle of Passion" about the Mexican revolution after which an army group is stuck in an island off Mexico.

She started her career as a professor of literature at the National University of Colombia. She worked as editor of the popular magazine Semana for twelve years. and was later involved in the politics of Colombia and was a member of the Trotskyite party. She became a member of the Socialist Workers Party of Spain where she lived for three years. She was in Argentina for four years as part of the underground resistance fighting against the military dictatorship. This experience comes out in her novel,"No place for heroes". She was briefly married to an Argentine politician with whom she had a son.