Beheadings at the Tower of London seem to have been the bread and butter of medieval England. Thomas Cromwell is thinking of his breakfast, on the first page of Hilary Mantel’s magisterial tome, as he supervises the beheading of Anne Boleyn, the second of Henry VIII’s several wives. Ever the blacksmith’s son despite his high offices, he admires the superb sword of Toledo steel that does the job, leaving the queen’s “narrow carcass” swimming in a “pool of crimson.” By the time the book ends, it is Cromwell’s own head that rolls in the dust, chopped off by a more business-like axe. The pain is the same—“acute, a raw stinging, a ripping, a throb”. His cheek, too, “rests on nothing, it rests on red” and his heart continues to “writhe in his chest, trying to breathe”, because no one has told it that he is dead.

Between these two gory scenes, Mantel weaves her unique magic that rips open five-centuries-old history and tells it as the throbbing drama that is life. Having already related the incredible rise of Cromwell from humble beginnings to the highest offices in the land in her two Booker prize-winning novels—Wolf Hall and Bring Up the Bodies—she is occupied here, in the final part of the trilogy, with his last four years: 1536-1540. A lot happens in these years—England pitted against Europe, Henry against the pope, the North up in arms, the monasteries under threat, the bones of saints like Becket no longer safe in their graves. Cromwell is at the heart of it all, scheming and plotting, dealing with the king and his own rivals with Machiavellian skill. The king is not an easy man, given to extreme vanity and maniacal swings, obsessed with getting a male heir from a legitimate marriage, tiring of one queen after another even as he fights his own inadequacies. Amongst his other responsibilities, Cromwell has to enable the king’s marriages. He pushes Anne of Cleves as the king’s fourth wife in order to forge a new power equation between England and the German Protestant states. But the marriage does not work: the bride is less than fascinated with her ageing, bloated spouse and the king’s pride is dented. The shadow of blame falls on Cromwell, adding to evidence of kingly ambition, and his powerful enemies close in for the kill. From there it is only downhill, all the way to the Tower.

Mantel has reinvented the historical novel, a genre in which the facts and the denouement are known, into an artifice of suspense and mystery. Several factors contribute to this: her point of view is consistently from inside the mind of Cromwell; the reader moves with Cromwell and hence is unaware, from page to page, of what will happen next. The past is always present, like in any human mind; the dead never really leave the world, their ghosts accuse or rejoice from beyond the grave. The delicious dark detail of medieval England is there in plenty; the writing moves from the allusive and lyrical to the witty and wry. There are no weighty paragraphs as evidence of immense research, no historical lacings to set the context. It all comes into the story through what the characters—lords and ladies, bishops and knaves—say and do. Mantel demonstrates that you do not win two Bookers, and then produce a credible candidate for a third, without prodigious talent and skill. If there must be a caveat it is that at nearly 900 pages, the book is too long, but I suppose no editor had the guts to pick up a red pen. The reader will need perseverance, though in the end it will be well rewarded. And a lockdown helps.

—The author is a former envoy to the US and the UK. 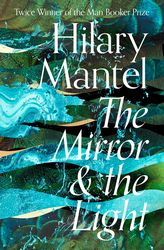 THE MIRROR & THE LIGHT