A new book looks at the “sonic nationalism” of the Mahatma

Any talk on Mahatma Gandhi’s engagement with music invariably begins with the mention of ‘Vaishnav jan to tene kahiye’, one of his favourite bhajans. The deeply resonant devotional song was originally written by a 15th century saint-poet from Gujarat and compiled as a song in Ashram Bhajanavali, the prayer book used at Gandhi’s Sabarmati Ashram. You could say that Ashram Bhajanavali is Gandhi’s playlist—a personal selection of morning prayers, recitations, scriptural chants, devotional songs and hymns drawn from the Hindu, Muslim, Christian, Jain and Sikh traditions. Gandhi made sure that these hymns and songs were part of the daily morning routine at the ashram, and they needed to be expertly sung by a trained musician.

In Lakshmi Subramanian’s Singing Gandhi’s India: Music and Sonic Nationalism, the historian decodes Gandhi’s thoughts and impressions on music, how he effectively used it as a tool of political communication, the centrality of bhajans in building the moral fibre of the ashram community and the “sonic nationalism” that played a defining role in the 20th century public sphere leading up to India’s independence. Often, the narrative stutters with the turgidity of academic prose and points get belaboured. But the author is working with scant resources on an understudied subject. Subramanian gives us many consistently Gandhian ways of approaching music—something worth reading in these politically charged times when a respectful Ram dhun (in praise of Lord Ram) can become a murderous chant.

Interestingly, for Gandhi, ‘Vande Mataram’ never quite represented a “national song”. It was, at best, a powerful political slogan. And singing it mechanically was equal to rote learning. For Gandhi, music was never an independent creative pursuit but could be used for “self-purification” and “self-cleansing”. Although Gandhi did not have much to say about classical musicians, he made an exception for M.S. Subbulakshmi, who sang his favourite bhajans in his later years. But his most favourite, ‘Hari tum haro’ took some time for Subbulakshmi to learn and send as a record to Gandhi, as the story goes. It was played by All India Radio for the first time following the announcement of Gandhi’s assassination.

Some of the sharpest insights on Gandhi’s engagement with music are presented in the last two chapters of the book titled, ‘Amplifying politics and spinning the wheel’ and ‘Spinning in silence, praying in public’, spanning the arc of non-cooperation, Quit India Movement and his final years staring at a real possibility of partition. Gandhi feared “acoustic aggression” and recognised how sound and its communalisation was exacerbating tensions between Hindus and Muslims. The author finds out that at almost every swadeshi meeting or conference that Gandhi’s addresses after 1918, he references the music of the spinning wheel—how it is superior to even sung music. He often demanded that his followers listen to him in silence; he emphasised that music can be a metaphor for order. 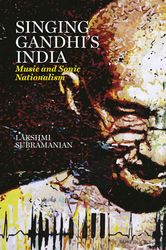