For most people, God is inerrant and infallible. Once, doctors were also considered akin to God, and that provided them protection. Times have changed. On one side, the baggage of “divinity” on doctors has reduced. But on the other, doctors are now routinely facing assault and hospitals are getting vandalised.

Dear People, with Love and Care, Your Doctors, edited by Dr Debraj Shome and Dr Aparna Govil Bhasker, is a genuine attempt to tell the strain and strength in doctor-patient relationship, from the perspective of doctors. Through its 34 articles, the book reminds readers that “doctors are also humans”. With simple language, Dear People... covers various facets of a doctor's life—both professional and personal. Each article is rich with emotive anecdotes.

The book does not shy away from the dark secrets of the Indian medical field. For instance, in the article The Night I Nearly Killed My Patient, Dr Aniruddha Malpani—an IVF specialist and founder of HELP, the world's largest free patient eduction library—points out that most medical colleges in India are run by inexperienced and unsupervised junior residents. Malpani describes an incident where he, as a junior resident, made a terrible mistake that worsened the condition of a patient. For that, he was publicly berated by his senior surgeon and professors, and was treated like pariah as that event could have affected the hospital's reputation. Long working hours, taxing medical training and the pressure of saving lives are pushing many junior doctors to the brink. According to a study published in the Indian Journal of Psychiatry, 30 per cent of Indian resident doctors suffer from depression and 17 per cent have contemplated suicide.

There are observations that most doctors often suffer from “God complex”, and so making an error is extremely shameful for them. The book suggests that medical errors will continue if doctors do not come forward, talk about their errors and learn from them.

A 2015 survey by the Indian Medical Association suggests that around 75 per cent of doctors in India have faced some form of violence. The book gives special attention to the issue. It makes an interesting observation that in an event of a discord between doctors and patients, the root cause will be money, most of the time.

The book features futuristic fiction, too. Written by Dr Marcus Ranney, Health Story 2033 imagines the nuances of doctor-patient relationship in a technologically advanced world. Another interesting article that explores the interpersonal relations of doctors is The Mr behind the Ms by C.B. Bhasker. A management consultant, Bhasker talks about what it means to have a doctor as one's life partner. With a pinch of humour, Bhasker writes how his perception of doctors has changed, and also how he improved his medical vocabulary over the years. Overall, Dear People... is a comprehensive book which offers relatable anecdotes to doctors and new insights to laymen. 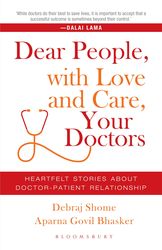 Dear People, with Love and Care, Your Doctors