GDP and other government statistics are problematic, worldwide. They go through revisions and often lead to surprises, but malpractice was never an issue. Except in 2015, and with every data set released thereafter. Why did it happen in India, and only after 2014? "If you have a better explanation than politics and political ideology, I am ready to listen," writes economist Surjit Bhalla in his new book Citizen Raj: Indian Elections 1952-2019.

Bhalla was a member of Prime Minister Narendra Modi's Economic Advisory Council. In his book, he analyses some "fake" issues—GDP data, the back series estimate of GDP growth in the UPA years, investment decline under the NDA, demonetisation being an economic disaster and overstating of GST revenue targets—in a myth-versus-reality format. The reality is all tilted in favour of the Modi government.

It is not the only book of its kind to be published during the election season. It follows close on the heels of Raghuram Rajan's The Third Pillar. Jailed Rashtriya Janata Dal chief Lalu Prasad Yadav has also released a book suggesting a strategy to defeat the BJP in the 2019 elections. In May, Union Home Minister Rajnath Singh's biography will be out. All these are novel efforts to reach those whose support cannot be earned through freebies. So, they are reaching out with statistics, facts, ideological essays and anecdotes between the two covers of a book.

Bhalla has done some interesting number crunching, which he uses to take readers to his conclusion. For instance, he shows that neither Sonia Gandhi as the UPA chairperson with an advisory committee, nor the RSS that is said to be guiding the BJP, had an impact on the voting pattern. He has analysed the Modi effect on the BJP, by measuring the difference between the BJP votes in 2014 and the party's previous best. It is 5.4 per cent of the national vote. Bhalla also studies the 9.3 per cent decline in the Congress votes between 2009 and 2014. Some of that went to the BJP, and some to regional parties. What went to the BJP, in Bhalla's view, is a result of the "Congress's secular decline".

By his calculations, Bhalla predicts that the BJP can get 232 to 274 seats this time, and the Congress, between 57 and 97. "History and math are not in [the Congress's] favour," he writes. He adds that if his figures are right, "then it might also well mean the beginning of the end of the Nehru-Gandhi dynasty". 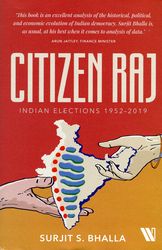