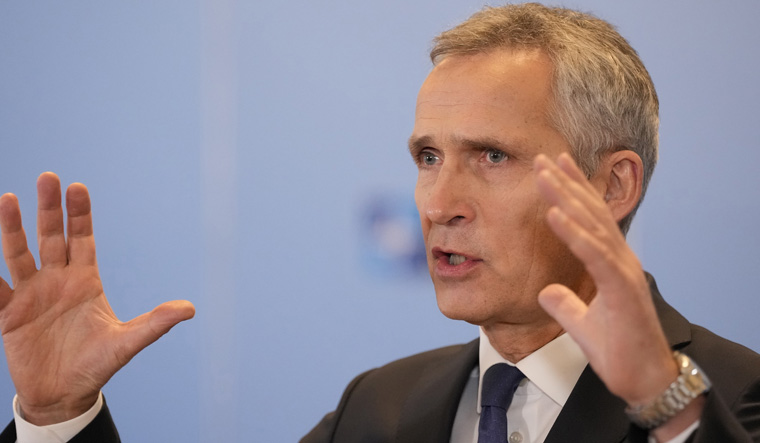 NATO Secretary-General Jens Stoltenberg delivers his speech as he arrives for the first day of the meeting of NATO Ministers of Foreign Affairs in Bucharest, Romania | AP

NATO Secretary-General Jens Stoltenberg on Tuesday accused Russia of trying to use winter as a weapon in the ongoing war against Ukraine.

“The Russian military has been targeting Ukraine's power grid with air strikes for weeks, leaving millions either without electricity or facing the prospect of a freezing winter without power,” BBC reported quoting Stoltenberg.

"We have to be prepared for more refugees crossing into the rest of Europe" as a result of Russia's "deliberate attack on critical services", Stoltenberg said.

NATO nations are meeting in Romania to discuss support for Ukraine. The NATO Chief said European nations must prepare for more refugees from Ukraine. “Recent figures show that since 24 February up until 22 September, more than 7.4 million refugees have fled Ukraine into Europe. Many have crossed to Romania,” Stoltenberg said.

NATO Secretary-General Jens Stoltenberg said that the war-torn nation will one day become a member of the world's largest security organization.

US Secretary of State Antony Blinken and his NATO counterparts have gathered in Romania to drum up urgently needed support for Ukraine, aimed at ensuring that Moscow fails to defeat Ukraine as it bombards energy infrastructure.

“NATO's door is open,” Stoltenberg said. “Russia does not have a veto on countries joining,” he said in reference to the recent entry of North Macedonia and Montenegro into the security alliance. He said that Russian President Vladimir Putin will get Finland and Sweden as NATO members soon.

In essence, Stoltenberg repeated a vow made by NATO in Bucharest in 2008 in the same sprawling Palace of the Parliament where the foreign ministers are meeting this week that Ukraine, and also Georgia, would join the alliance one day.

Some officials and analysts believe this move pressed on the NATO allies by former US President George W. Bush was partly responsible for the war that Russia launched on Ukraine in February. Stoltenberg disagreed.

“President Putin cannot deny sovereign nations to make their own sovereign decisions that are not a threat to Russia,” he said. I think what he's afraid of are democracy and freedom, and that's the main challenge for him.

Even so, Ukraine will not join NATO anytime soon. With the Crimean Peninsula annexed, and Russian troops and pro-Moscow separatists holding parts of the south and east, it's not clear what Ukraine's borders would even look like. Many of NATO's 30 allies believe the focus now must be on defeating Russia.

During the two-day meeting, Blinken will announce substantial US aid for Ukraine's energy grid, US officials said.

Ukraine's network has been battered countrywide since early October by targeted Russian strikes, in what US officials call a Russian campaign to weaponise the coming winter cold.

“We are all paying a price for Russia's war against Ukraine. But the price we pay is in money," Stoltenberg said Tuesday, while the price Ukrainians pay is a price paid in blood.

Individual allies are also likely to announce fresh supplies of military equipment for Ukraine chiefly the air defence systems that Kyiv so desperately seeks to protect its skies but NATO, as an organisation, will not, to avoid being dragged into a wider war with nuclear-armed Russia.

The ministers will hold a working dinner with their Ukrainian counterpart, Dmytro Kuleba, on Tuesday evening. On Wednesday, they will also address ways to step up support for partners who officials have said are facing Russian pressure-Bosnia, Georgia, and Moldova.