The Hinduja family is ranked number one on the list 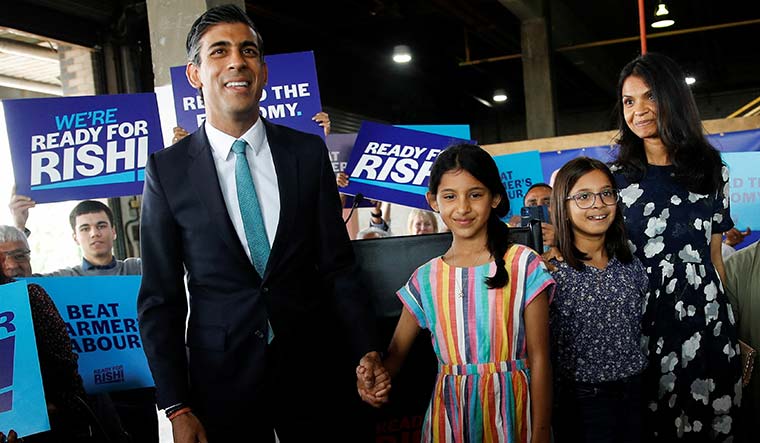 Staying together: Rishi Sunak, his wife Akshata Murty, and his daughters, Anoushka and Krishna, at a Conservative Party event | Reuters

Sunak's father-in-law NR Narayan Murthy is the co-founder of Indian IT major Infosys. The couple is valued at £790 million. The Hinduja family is featured on the top of the list for the eighth consecutive time with an estimated wealth of about £30.5 billion.

Mayor of London Sadiq Khan presented a copy of the 'Asian Rich List 2022' to Ritu Chhabria, daughter of Gopichand Hinduja, Co-Chairman of the Hinduja Group at the 24th annual Asian Business Awards at the Westminster Park Plaza hotel on Wednesday night.

Addressing the gathering, Chief Guest Oliver Dowden, MP, Chancellor of Dutchy of Lancaster, told PTI, "Throughout my life, I have seen first-hand the hard work, determination and entrepreneurship of the British Asian community. And, of course, in my latest job, I have a British Asian Boss, my very good friend Mr Rishi Sunak, the United Kingdom's first-ever British Asian Prime Minister.”

This year's Asian Rich list boasts 16 billionaires from the UK, one more than the last year with most of the billionaires seeing their wealth increase or stay the same as last year.

Rishi Sunak became the first person of Indian origin to be the UK's prime minister on October 25. Sunak took over after Liz Truss stepped down after a tumultuous term of about seven weeks.