With decline in Russian energy imports, Germany could face shortage in coming months 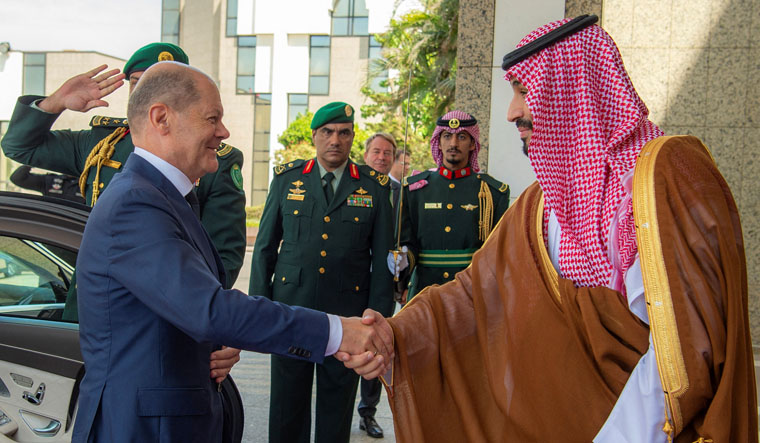 German Chancellor Olaf Scholz arrived on Saturday in Saudi Arabia for the first stop of a two-day, three-country visit to the Middle East aimed at striking new energy deals and forging fresh alliances amid the economic and geopolitical turmoil resulting from Russia's invasion of Ukraine.

The German government has scrambled to wean Europe's biggest economy off Russian oil, coal and gas since coming to office last December.

While imports from Russia have declined sharply since then, there are fears that Germany, like other European countries, could face an energy shortage in the coming months.

“Bridging the gap in natural gas supplies is a particular concern and one of the reasons Scholz is also heading to the United Arab Emirates and Qatar together with a high-level business delegation,” senior officials said.

The officials, who briefed reporters on condition of anonymity ahead of the trip, said Scholz would raise human rights issues when he meets Saudi Arabia's powerful Crown Prince Mohammed bin Salman in Jeddah.

Photos released by the oil-rich kingdom's official news agency showed the two men greeting each other with a hearty handshake and smiles before sitting down for talks beneath a large portrait of King Salman.

US President Joe Biden was criticised in July for meeting with the Saudi crown prince, despite allegations that he was involved in the killing of Saudi journalist Jamal Khashoggi.

“Of course, this trip is being closely watched and we're going to encounter difficult partners there. And yet we can't refuse to have such meetings and such cooperation,” one German official said

“In a world with 193 countries and big differences, it's not just the German chancellor but many other leaders too who are seeking out talks at the moment and trying to forge new alliances and strengthen old ties,” said the official, who was not authorised to be quoted by name on the trip.

From Saudi Arabia the German leader flies to Abu Dhabi, where he will meet with President Sheikh Mohammed bin Zayed Al Nahyan of the United Arab Emirates and sign an energy accord. Talks there will also address the country's hosting of next year's UN climate talks.

The final stop is Doha, where Scholz will meet Qatar's emir, Sheikh Tamim bin Hamad Al Thani, to discuss bilateral relations, regional issues such as tensions with Iran and the Gulf nation's upcoming hosting of the soccer World Cup.

German officials said all energy agreements will take into account the country's plans to become carbon neutral by 2045, requiring a shift from natural gas to hydrogen produced with renewable energy in the coming decades. Saudi Arabia, which has vast regions suitable for cheap solar power generation, is seen as a particularly suitable supplier of hydrogen, they said.