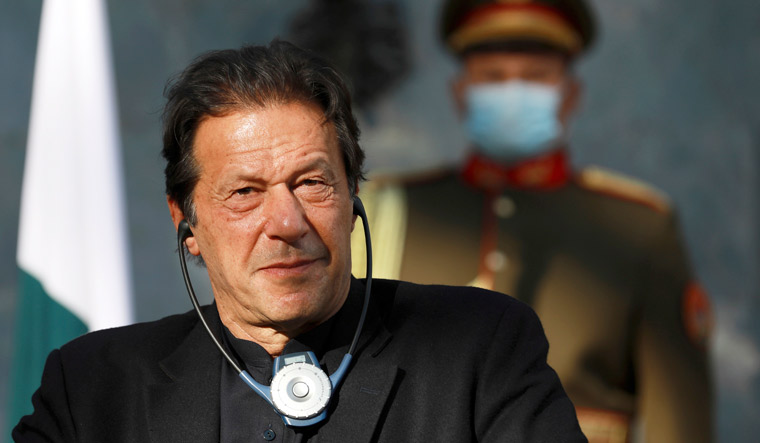 Imran Khan on Thursday dodged a contempt indictment when a top Pakistani court deferred proceedings against the former prime minister after he appeared before it and expressed willingness to apologise for his controversial remarks against a female judge.

The Islamabad High Court was expected to formally indict Khan in contempt proceedings against him for passing controversial remarks against Additional District and Sessions Judge Zeba Chaudhry during a rally here last month.

Khan appeared before the court amid tight security.

The Islamabad High Court deferred contempt proceedings against Khan after he expressed his willingness to apologise to Chaudhry for his controversial remarks.

As the hearing began, the former prime minister and chairman of the Pakistan Tehreek-e-Insaf (PTI) party sought permission to put his statement on the record, saying he was barred from speaking at the last hearing.

He went on to assure the court that "I will not do something like this in the future.

"I am sorry if I have crossed a red line," he added.

As he made the plea, Chief Justice Minallah asked if he was ready to visit the female judge to offer an apology then it was enough. "It is your personal decision as to visit the judge in person. If you have realised the mistake and are ready to apologise for it that is enough," he remarked.

He also asked the former premier to submit an "affidavit detailing what you have said" and adjourned the hearing till October 3.

During the rally here on August 20, Khan had threatened to file cases against top police officials, election commission and political opponents over the treatment meted out to his aide Shahbaz Gill, who was arrested on charges of sedition.

He had also taken exception to Judge Chaudhry, who had approved Gill's two-day physical remand at the request of the police, and said she should "prepare herself as action would be taken against her."

Hours after the speech, Khan was booked under the Anti-Terrorism Act for threatening police, judiciary and other state institutions at his rally.

Khan was ousted from power in April after losing a no-confidence vote in his leadership, which he alleged was part of a US-led conspiracy targeting him because of his independent foreign policy decisions on Russia, China and Afghanistan.

The cricketer-turned-politician, who came to power in 2018, is the only Pakistani Prime Minister to be ousted in a no-confidence vote in Parliament.