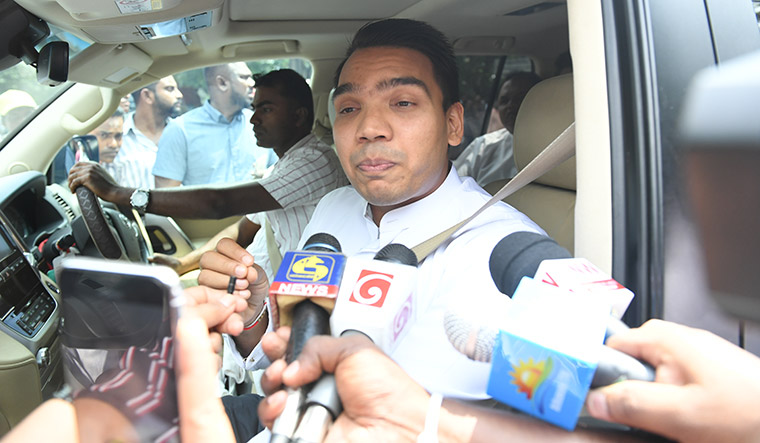 Namal Rajapaksa, the son of the former president and prime minister Mahinda Rajapaksa

Sri Lanka's politically under siege Rajapaksa family would return to dominate once again by forming a new alliance, Namal Rajapaksa, the son of the former president and prime minister Mahinda Rajapaksa, said on Friday.

"We will form a new political alliance under the leadership of Mahinda Rajapaksa," he told a political gathering of the ruling Sri Lanka Podujana Peramuna (SLPP) in the southwestern province of the crisis-hit country.

The SLPP has been at the receiving end of public anger when the island plunged deep into the current economic crisis, leading to street protests in late March, blaming the government for its incompetence.

A continuous public protest which lasted over three months saw the ouster of Gotabaya Rajapaksa, the then president.

Namal Rajapaksa said Gotabaya Rajapaksa's inability to crack down on the protests, which he claimed had turned violent, was the reason for the ousted President's downfall.

The Rajapaksa family had dominated Sri Lanka's political scene for nearly two decades before all the brothers were forced to quit following unprecedented anti-government protests.

Namal's father Mahinda resigned on May 9 when his supporters physically attacked the protest site, followed by bloody violence that left many dead.

A backlash thereafter saw over 70 SLPP parliamentarians suffering arson attacks on their private properties throughout the country in addition to one of them being killed in a mob attack.

The SLPP since May has suffered defections with nearly 50 of their coalition members quitting the party to form other alliances.

The protest movement forced the fleeing of Gotabaya Rajapaksa from the country while Basil Rajapaksa, the former finance minister and Namal's uncle, was stopped at the airport early in July from leaving the country by the protest activists.

However, Basil Rajapaksa departed to the US on Friday after the court allowed him to travel overseas, officials said.