Under probe, Khan faces the spectre of lifetime disqualification 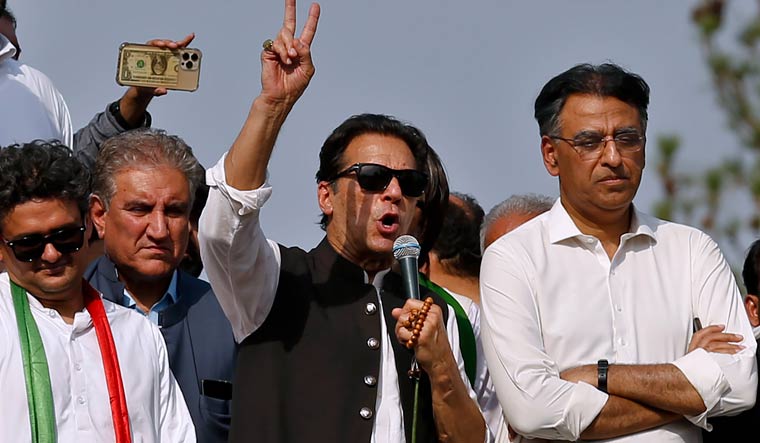 Former Pakistan prime minister Imran Khan announced that he will contest elections on all nine assembly seats that fell vacant after his party's Pakistan Tehreek-i-Insaf lawmakers resigned. At least 123 lawmakers of PTI had tendered resignation en masse on April 11, two days after Khan was ousted through a no-confidence vote. But, the speaker accepted the resignation of only 11 of them on July 28, leading to the Election Commission of Pakistan (ECP) announcing that the by-election on nine would be held on September 25. Two lawmakers were indirectly elected and no election is required for their seats. The PTI announced that Khan has decided to personally contest elections from the nine constituencies.

At the same time, Pakistan's ruling alliance on Thursday filed a petition with the election commission seeking lifetime disqualification of Khan for not disclosing information regarding the gifts received from the 'Toshakhana' (state depository) in his assets declaration. The petition submitted by the Pakistan Democratic Movement (PDM) sought Khan's lifetime disqualification under Article 62(1)(f) of the country's Constitution which is the same provision under which former prime minister Nawaz Sharif was disqualified in 2017, Express Tribune reported.

The petition asserts that the Pakistan Tehreek-e-Insaaf (PTI) chairman did not disclose the information regarding the gifts received from the Toshakhana in his assets declaration and thus should be disqualified under the provision of Article 62(1)(f), which mentions the precondition for a member of parliament to be "sadiq and ameen" (honest and righteous).

As per Pakistan's law, any gift received from dignitaries of a foreign state must be kept in the Toshakhana.

The Toshakhana case made headlines after the Pakistan Information Commission (PIC)—an independent and autonomous enforcement body established under Section 18 of the Right of Access to Information Act—accepted an application and ordered Cabinet Division to provide the information about the gifts received by then prime minister Khan from foreign dignitaries.

According to Pakistani media reports, Khan had earned Rs 36 million from the sale of three expensive watches gifted by visiting dignitaries from friendly Gulf countries. While responding to the Toshakana controversy earlier in April, Khan had said that those were his gifts, so it was his choice whether or not to keep them. "Mera Tohfa, Meri Marzi [my gift, my choice]," he had said.