Indian Peacekeepers have ensured safety of UN personnel and property 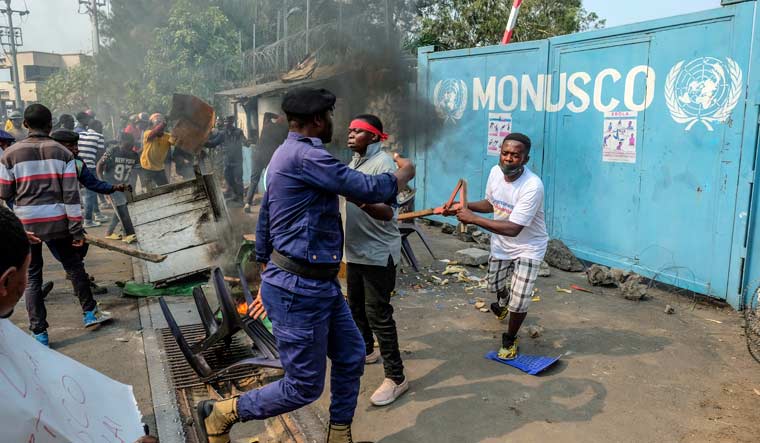 Residents protest against the United Nations peacekeeping force (MONUSCO) deployed in the Democratic Republic of the Congo, in Goma, Monday, July 25, 2022 | AP

The Indian Army on Monday prevented groups of civilian armed groups in Congo from looting its operating bases and Level III hospital in Kinshasa.

“Attempts to loot Indian Army operating bases and Level III hospital were thwarted by robust actions by Indian Peacekeepers strictly in accordance with the UN mandate and rules of engagement,” the Indian Army officials told ANI

The officials of the Indian Army added, “Indian Peacekeepers have ensured safety of UN personnel and property in locations of their deployment. There are reports that certain UN office complexes have been ransacked. The situation is being closely monitored”.

The Indian Army is part of UN peacekeeping missions in eight out of 14 UN missions worldwide. Actions by the Indian peacekeepers are in accordance with the UN mandate and rules of engagement. The Indian Army is a part of UN missions in Congo, Lebanon, South Sudan, Golan Heights, Syria, Western Sahara, Abyei, and Cyprus. India is also deploying an infantry Battalion Group in United Nations Interim Security Force for Abyei (UNISFA).  The United Nations Organization Stabilization Mission in the Democratic Republic of the Congo (MONUSCO) has been contributing to the stabilisation of the strife-torn region in accordance with the UN mandate.