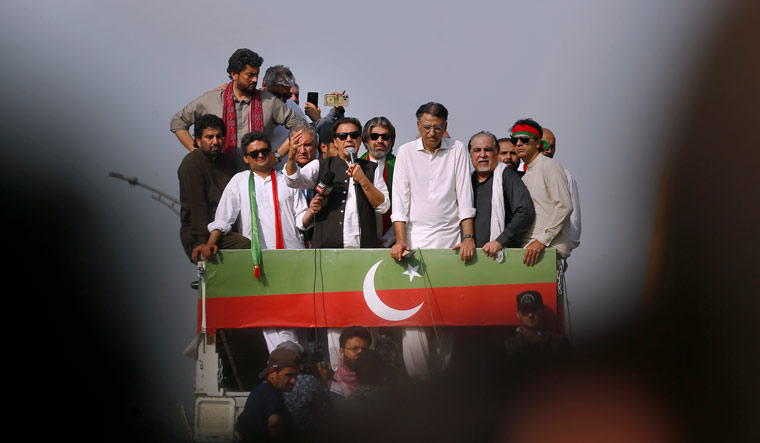 A defiant Imran Khan on Thursday warned that he would return to the Pakistani capital with the entire nation if the "imported government" failed to announce fresh general elections within six-day deadline, prompting Prime Minister Shehbaz Sharif to retort back that his "dictation won't work" and Parliament would decide the date for polls.

Addressing a rally of thousands of protesters of the Azadi March' at Jinnah Avenue here on Thursday morning, Khan lashed out at the Sharif government for using "tactics" like raids and arrests to stop his Pakistan Tehreek-e-Insaf (PTI) party's march, even as he thanked the Supreme Court for taking notice of the matter.

"My message for the imported government is to dissolve assemblies and announce elections. Otherwise, I will come back again to Islamabad after six days, the 69-year-old cricketer-turned politician told his supporters.

Hours later, Sharif - who replaced Khan in April - in his address to the National Assembly refused the demand, asserting that his coalition government would not take dictation from any one on holding the elections.

"I want to clarify to the leader of this group (Imran Khan), your dictation won't work. This House will decide when to hold elections," the prime minister said in a sharp retort to Khan's deadline.

The current National Assembly would complete its five-year term in August next year, which would be followed by the general elections. However, the prime minister can dissolve parliament any time and call fresh elections.

Sharif said since he took oath on April 22 and decided to work for the betterment of the country, the government was threatened with protests.

"The doors were open for talks with the Opposition but I will not take any dictation," he said. "I can form a committee but dictation will not work and no group or party can be allowed to rebel against the Constitution."

The prime minister said Khan was trying to create a situation like in 2014 when he held a sit-in for 126 days, resulting in clashes with police and a lot of damage to the state property.

Khan on August 14, 2014 had launched a massive rally that began from Lahore and ended in Islamabad. The protest was driven by accusations that the PML-N had rigged the elections in May 2013. The 'Azadi March' demanded the resignation of then prime minister Nawaz Sharif.

On Wednesday, the apex court had ordered that the ground between G-9 and H-9 Sectors of the national capital should be provided for the purpose of a rally by Khan's party.

The bench said the apex court's Wednesday order would remain in place that asked the government and the PTI to sit together to finalise modalities for a peaceful and safe conduct of the ousted party's long march to Islamabad to press the government for announcement of fresh polls within next six days.

Interior minister Rana Sanaullah said Khan's decision to hold the rally at the D-Chowk was a violation of the Supreme Court which asked his party to organise the rally at a ground in H-9 Sector of the capital adjacent to the Srinagar Highway.

The D-Chowk in Islamabad is located close to several important government buildings: the Presidency, the Prime Minister's office, the Parliament, and the Supreme Court.

Sanaullah said Khan had "misled" the apex court by taking permission for holding the rally at a specific place in the capital (sector H-9) but later announcing it would be held at D-Chowk.

Khan, who was ousted from power last month through a no-trust vote, has been claiming that the no-trust motion against him was the result of a foreign conspiracy because his independent foreign policy and funds were being channelled from abroad to oust him from power. He has named the US as the country behind the conspiracy, a charge denied by Washington.

Before cancelling the planned open-ended sit-in in Islamabad, Khan said that there was a "huge responsibility" on the Supreme Court judges and asked where in a democracy peaceful protests were not allowed and demonstrators had to face tear-gas shelling, police raids and arrests.

"I had decided that I will sit here until the government dissolves assemblies and announces elections, but of what I have seen in the past 24 hours, they (govt) are taking the nation towards anarchy," he said, claiming that the government was also trying to create a divide between the nation and police.

Khan said the government would be happy if he staged a sit-in in Islamabad as it would lead to clashes between the people and police and the army, the Dawn newspaper reported.

He claimed that five protesters from his Pakistan Tehreek-e-Insaf (PTI) were killed in clashes after the party's march, saying that one had fallen off the Attock bridge amid tear-gas shelling and the other was pushed into the Ravi river.

Following his six-day deadline announcement, Khan left for his private residence Bani Gala, leaving behind his supporters who marched for hours in anticipation of a major public gathering and sit-in.

The ruling party leaders said that Khan had "run away after spreading chaos" in the country as protesters at D-Chowk began dispersing after he gave the government a six-day deadline to call elections.

Khan had entered Islamabad in the early hours of Thursday and marched towards D-Chowk, while the federal government authorised the deployment of the army in the Red Zone to "protect important government buildings".

Prime Minister Sharif's coalition government initially allowed the protest, but on Tuesday refused to give permission, fearing violence and lawlessness in the wake of the march.

The government had imposed Section 144 to ban big gatherings in Punjab's capital Lahore, the twin cities of Rawalpindi and Islamabad, and Karachi, as well as other major cities.

However, hundreds of supporters of Khan reached D-Chowk where police used tear-gas to disperse them but without any success. The angry workers retaliated by putting on fire several trees and shrubs along the Jinnah Avenue leading to the D-Chowk.