Why is Turkey's Erdogan blocking NATO accession of Finland and Sweden?

Erdogan has been a bitter critic of the Nordic countries, especially Sweden 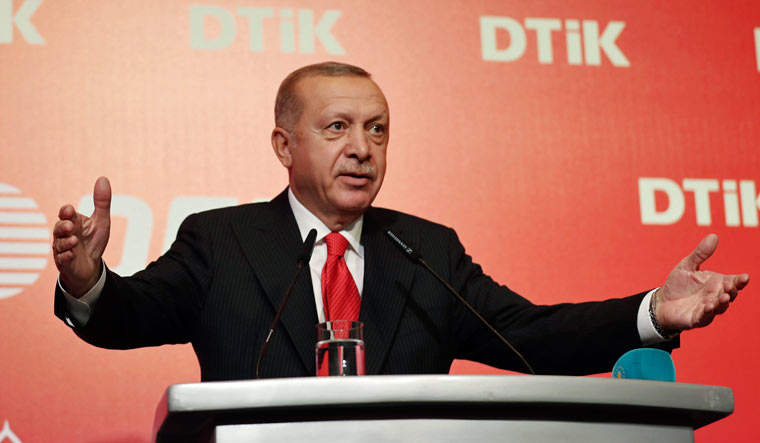 On May 18, ambassadors of Finland and Sweden were at the NATO headquarters at Brussels to hand in their requests to join the transatlantic security organisation. NATO secretary general Jens Stoltenberg received them warmly and said it was a good day for the group. Turkish President Recep Tayyip Erdogan, who commands NATO's second largest standing army, however, chose to throw a wrench into the process by ordering Turkey's NATO representative Basat Ozturk to block a procedural vote on the accession. As NATO rules mandate that new members can be added only with the agreement of all 30 existing members of the alliance, the expansion plan—a response to the Russian invasion of Ukraine—has been put on hold, at least for now.

Turkey's move, meanwhile, came as a surprise. Speaking to Finnish President Sauli Niinisto on April 4 over telephone, Erdogan had promised support for Finland's entry into the alliance. But over the past couple of weeks, Erdogan made a U-turn, and made it clear that it would not be a smooth ride for the two Nordic nations and that they might have to make a few painful concessions to Turkey. And, on May 14, when NATO foreign ministers and their Swedish and Finnish counterparts met in Berlin to informally discuss the expansion of the alliance, Turkish Foreign Minister Mevlut Cavusoglu reportedly even raised his voice against Sweden's Anne Linde, breaking established protocol. “For us, it was a historic moment and yet Cavusoglu said he was irritated at Linde's 'feminist policy', bringing so much drama,” said a NATO diplomat.

Erdogan has been a bitter critic of the Nordic countries, especially Sweden, largely because of their commitment towards human rights, translating into a lenient policy towards Kurdish organisations, branded traitors by Turkey. For instance, Sweden and other Nordic countries continue to host members of the Kurdistan Workers' Party (PKK), the biggest armed resistance group fighting for the rights of the Kurdish minority spread across Turkey, Iraq, Syria and Iran. Turkey views Kurdish separatists as traitors and has designated the PKK as a terrorist organisation. Although the US and the European Union, too, have notified PKK (led by Abdullah Ocalan, who is in a Turkish prison since 1999) as a terrorist group, Sweden and Finland have been reluctant to toe the Turkish line on the Kurdish issue.

Both Sweden and Finland have also given asylum to followers of Turkish scholar and cleric Fethullah Gulen. Erdogan was once on friendly terms with Gulen, who was hounded by the Turkish secular governments in the past and was forced to move to the US in 1999. But the two had a major falling out in 2013 after Gulen criticised the manner in which Erdogan dealt with the Gezi Park protests and anti-government demonstrations. Erdogan has accused Gulen of trying to overthrow his government and of masterminding the failed coup against him in 2016.

After Finland and Sweden announced their intention to apply for NATO membership, Erdogan said Scandinavian countries had become guesthouses for terrorist organisations. “Terrorists are even members of parliament in some countries. It would not be wrong to say that we are bittersweet watching the solidarity and cooperation in the region, the sources used, the arms opened, the tolerance shown,” said Erdogan, addressing the Turkish parliament. “Because we, as a NATO ally who struggled with terror for years, whose borders were harassed, big conflicts occurred just next door, have never seen such a picture.”

Turkey has always been a maverick member of the transatlantic alliance. It was opposed to granting membership to Greece in 1952 and has engaged in multiple conflicts with its western neighbour despite both countries being part of NATO. Under Erdogan, Turkey's ties with NATO have remained tense, and it has threatened to walk out of the alliance several times. Back in 2009, Erdogan refused to allow Anders Rasmussen of Denmark from taking over as NATO secretary general unless Denmark shut down a Kurdish television network. Rasmussen's appointment was cleared, but the network was shut down a year later.

In 2017, Turkey withdrew from the annual joint NATO manoeuvres after images of Erdogan and Mustafa Kemal Ataturk, the first president of the Turkish Republic, were placed on enemy targets. Although the NATO commander apologised for the mistake, Erdogan refused to send his troops for the exercises. A year later, after the US refused to sell it anti-aircraft missile systems, Ankara purchased the S-400 system from Russia and even floated the idea of a new security alliance headed by Russia. Washington responded by imposing sanctions on Turkish military procurement and manufacturing, and kicking Turkey out of the F-35 aircraft development programme. The US was also angered by Turkey's lengthy detention of one of its citizens, pastor Andrew Brunson.

The Biden administration, in fact, finds it difficult to manage relations with Turkey. Biden is unhappy with Turkey's Syria policy, the gas drilling in the Eastern Mediterranean and the refusal to join the sanctions regime against Russia. Last year, Biden became the first American president to call the 1915-1917 massacre of nearly 1.5 million Armenians by Ottoman forces as genocide. Erdogan said the decision opened a deep wound in US-Turkey relations. By ratcheting up tension during a critical phase of the Russia-Ukraine conflict, Erdogan expects the US to step in and negotiate. He feels Biden would be able to put pressure on Finland and Sweden to respond to Turkish demands on the Kurdish issue and also to roll back sanctions on weapons sale. Moreover, the Turkish military is keen to get more F-16s from the US and to return to the F-35 development project.

Another reason for Erdogan's brinkmanship could be the presidential elections due next summer. Opinion polls indicate a tight race and even the possibility of the president losing after being in power since 2003. The Turkish economy is a mess, with inflation at 66.9 per cent. Erdogan's harebrained policies have pushed the economy to the brink and people are feeling the pinch. The economic crisis has forced him to reach out to Saudi Arabia, the UAE, Egypt and Israel after having broken off ties with them in pursuit of an unnecessarily provocative foreign policy. Erdogan mollified the Saudis by transferring the trial of the Jamal Khashoggi murder case to Saudi Arabia and by travelling to Jeddah to meet with Crown prince Mohammed bin Salman. The climbdown has helped end the Saudi boycott of Turkish products and could facilitate more Saudi investment in Turkey. Yet the financial situation is so dire that Erdogan needs support from the west as well and the NATO expansion issue could possibly help. Moreover, “standing up to the west” on the Kurdish could help Erdogan to consolidate the nationalist vote. If the NATO issue plays out well, Erdogan could consider advancing the polls to be held later this year.

Turkey, meanwhile, is careful about managing its ties with Russia. Although the two countries are regional rivals and competitors, they have shared interests on a range of issues, including maintaining peace and stability in the neighbourhood, especially regarding countries such as Armenia, Azerbaijan and Georgia. Turkey is a major customer of Russian natural gas. The TurkStream pipeline not only supplies gas to Turkey, but also serves as an alternative route for Russian exports through the Black Sea, keeping Ukraine out of the equation. Erdogan has, therefore, been circumspect about isolating Russia completely. For instance, Turkey has not imposed sanctions on Russia and refused to support Russia's exclusion from the Council of Europe even as it offered generous support to the Ukrainian war efforts, including supplying it with the lethal Bayraktar drones. Critics allege that Turkey has also been a safe haven for Russian oligarchs who are hounded by western sanctions and also for Russian investments. Russian luxury yachts can still be seen moored in Turkish marinas. Erdogan seems keen to position himself as a bridge between Putin and the west as negotiations seem to be the only way to find a solution to the Russia-Ukraine war.

Erdogan, however, is unlikely to take his opposition to Finland and Sweden joining the NATO beyond a point. Sinan Ulgen, director of the Centre for Economics and Foreign Policy Studies in Istanbul, said Turkey would possibly relent after extracting a price. Aggressive negotiations are already afoot, with US and European diplomats and leaders talking to their Turkish counterparts to find a solution acceptable to Erdogan. If Erdogan continues to play spoilsport, other members of the alliance could offer mutual security guarantees to Finland and Sweden, making them de facto NATO members. Erdogan thrives on brinkmanship, but he is unlikely to follow an isolationist path for long.