US: Ted Budd, Cheri Beasley to face off for North Carolina Senate

Budd had the endorsement of Donald Trump 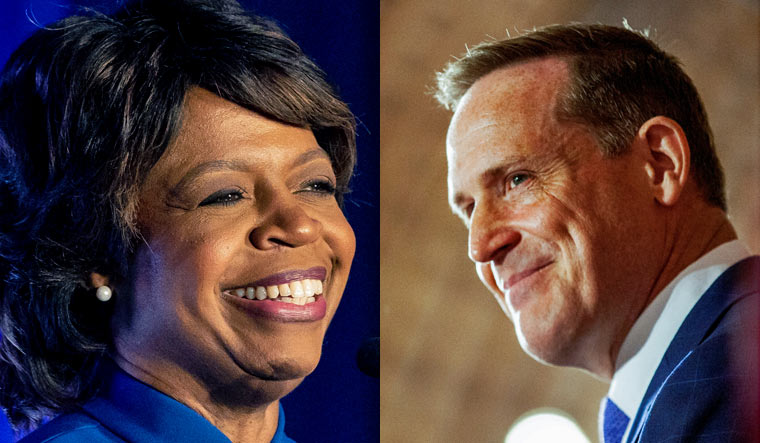 Budd had the endorsement of Donald Trump and his victory is a boost for the former president, who is looking to reshape a new generation of Republicans. Beasley, a former state supreme court justice, won her 11-candidate primary. If she prevails in November, Beasley would be the state's first Black senator.

The year's midterm primary season is entering its busiest stretch with races also unfolding in Kentucky, Oregon, and Idaho. Trump is poised to notch several easy wins, including in Pennsylvania's much-watched GOP race for governor, which far-right contender Doug Mastriano was already leading before the former president backed him over the weekend.

But Trump's preferred Senate candidate in Pennsylvania, Mehmet Oz, has divided conservatives who are typically in lockstep with Trump. Some are suspicious of the ideological leanings of the celebrity heart surgeon who gained fame as a frequent guest on Oprah Winfrey's talk show. Oz has spent much of the campaign in a heated fight with former hedge fund CEO David McCormick.

That's allowed commentator Kathy Barnette to emerge in the final days of the primary as a conservative alternative to both Oz and McCormick. Should she win the primary and general election, Barnette would be the first Black Republican woman elected to the US Senate.

Trump, who has held campaign-style rallies with Oz, insists he is the best candidate to keep the Senate seat in Republican hands in the fall. Given his level of involvement in the race, a loss would be a notable setback for the former president, who is wielding endorsements as a way to prove his dominance over the GOP ahead of a potential 2024 presidential run.

I think he's tough. He's very smart. He'll be helpful, Trump told a Philadelphia radio station on Tuesday, referring to Oz. "I also think he's the one that's gonna win the election. You know that's not an easy election to win.

Democrats have their own high-profile primaries. In Pennsylvania, progressive Lt. Gov. John Fetterman has dominated the Senate race but was forced off the campaign trail by a stroke. The 52-year-old tweeted a picture of himself casting an emergency absentee ballot from the hospital and his campaign later released a statement saying he was undergoing surgery to implement a pacemaker with a defibrillator which should address the root cause of his health scare.

Meanwhile, Pennsylvania Attorney General John Shapiro, who was unopposed for his party's governor's nomination, tweeted that he had mild COVID-19 symptoms that were forcing him from the campaign trail.

Tuesday's contests could ultimately determine how competitive the general election will be this fall, when control of Congress, governor's mansions and key elections posts are up for grabs. That's especially true in the perennial political battleground of Pennsylvania, where some Republicans are already worried that Mastriano is too extreme to woo moderates who are often decisive in general elections.

More fundamentally, Tuesday's primaries could test voters' commitment to democratic principles. Barnette is running even further to the right than Oz and participated in the January 2021 rally that turned into an insurrection at the US Capitol.

Then there's Mastriano, who was also outside the Capitol during the mob attack and would appoint Pennsylvania's chief elections official if he becomes governor. He has pledged to take the extraordinary step of requiring voters to re-register to vote  even though that's barred by the National Voter Registration Act and likely violates significant protections under federal, and possibly state, law.

Mastriano made Trump's lies about widespread electoral fraud costing him the presidency a centrepiece of his campaign  and has been subpoenaed by the House committee investigating the Capitol riot following his efforts to name a slate of alternate Electoral College electors in Trump's favour.

Stacy Steinly, a 51-year-old school bus assistant, cast her ballot in the town of Hamburg, Pennsylvania, about 30 miles west of Allentown. She said she chose Mastriano because "he was sticking by President Trump and saying that everything was fraudulent."

"Everything he was talking about was making sense, said Steinly, who wore a black T-shirt that said Biden is not my president (or anyone else's) based on legal votes.

Trump's safest bet might be Budd, who has overcome a slow start to emerge from 14 Republican primary candidates, including former Governor Pat McCroy, as a favourite in North Carolina's Republican Senate primary.

While much of the attention during the opening phase of the primary season has focused on Trump's grip on the GOP, the contests also serve as a referendum on Biden's leadership of the Democratic Party. In the president's native state of Pennsylvania, US Rep. Conor Lamb, a moderate in the mold of Biden, is at risk of being trounced by Fetterman.

Lamb said Tuesday he had detected frustration among Democratic primary voters, a feeling he said he shared as the party has struggled to accomplish much of its policy agenda. But he argued that moderates helped Democrats retake control of the House in 2018 and that the party should double down on that approach this year.