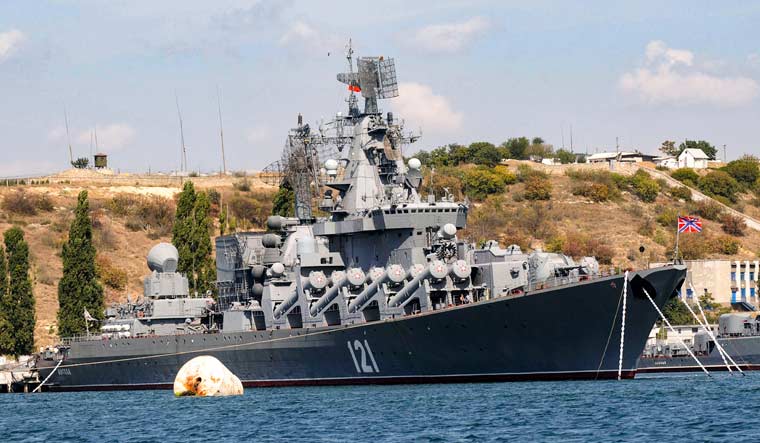 Ukrainian officials said their forces hit the flagship of Russia's Black Sea fleet with missiles, and one official said on Thursday that the vessel sank.

Russia said the Moskva was badly damaged by a fire that forced the warship's evacuation but that it was still afloat.

The loss of the warship named for the Russian capital would be a major military and symbolic defeat for Moscow as its troops regroup for a renewed offensive in eastern Ukraine after retreating from much of the north, including the capital.

Russia did not acknowledge any attack but said a fire aboard the ship, which would typically have 500 sailors on board, forced the entire crew to evacuate.

It later said the fire had been contained and that the ship would be towed to port with its guided missile launchers intact.

The ship can carry 16 long-range cruise missiles, and its removal from combat would greatly reduce Russia's firepower in the Black Sea.

Regardless of the extent of the damage, any attack would represent a major blow to Russian prestige seven weeks into a war that is already widely seen as a historic blunder.

It was not immediately possible to reconcile the vastly different accounts, and cloud cover made it impossible to locate the ship or determine its condition based on satellite photos.

There was even some caution from Ukrainian officials: One said the ship sank, and a video from its armed forces described it overturning and beginning to sink, but another official refused to confirm that.

The news of damage to the ship came hours after some of Ukraine's allies visited the embattled country and sought to rally new support.

The leaders of Poland, Lithuania, Latvia and Estonia hail from countries on Russia's doorstep and fear they could be next. Lithuanian President Gitanas Nauseda declared that the fight for Europe's future is happening here.

US President Joe Biden, who called Russia's actions in Ukraine a genocide this week, has approved $800 million in new military assistance to Kyiv. He said weapons from the West have sustained Ukraine's fight so far and “we cannot rest now”.

The news of the flagship's damage overshadowed Russian claims of advances in the southern port city of Mariupol, where they have been battling the Ukrainians since the early days of the invasion in some of the heaviest fighting of the war at a horrific cost to civilians.

But Vadym Denysenko, adviser to Ukraine's interior minister, rejected the claim, telling Current Time TV that the battle over the seaport is still ongoing today.

Satellite photos from Planet Labs PBC show the Moskva steaming out of the port of Sevastopol on the Crimean Peninsula on Sunday.

Maksym Marchenko, the governor of the Odesa region, across the Black Sea to the northwest of Sevastopol, said the Ukrainians struck the ship with two Neptune missiles and caused serious damage.

Oleksiy Arestovych, an adviser to Ukraine's president, then said the ship sank, calling it an event of colossal significance."

Russia's Defence Ministry said ammunition on board detonated as a result of a fire, without saying what caused the blaze.

It later said the ship was afloat and would be towed in for repairs. It said its main missile weapons were not damaged.

In addition to the cruise missiles, the warship also had air-defence missiles and other guns.

The Neptune is an anti-ship missile that was recently developed by Ukraine and based on an earlier Soviet design.

The launchers are mounted on trucks stationed near the coast, and, according to the Washington-based Centre for Strategic and International Studies, the missiles can hit targets up to 280 kilometers away.

The US was not able to confirm Ukraine's claims of striking the warship, US national security adviser Jake Sullivan said.