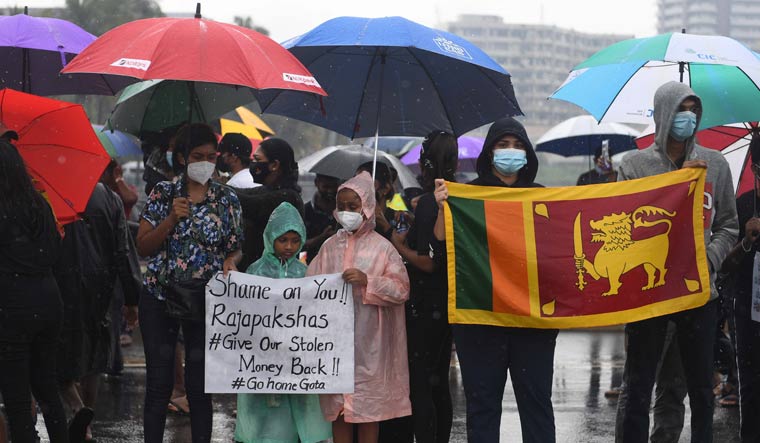 The strategic long holiday declared by the Gotabaya Rajapaksa government in Sri Lanka seems to have only added strength to the “Go Home Gota” protests in the streets of Colombo. Thousands of protesters thronged the Galle Face green seafront near the President Secretariat on Sunday despite heavy rains and thunder storms. Clad in rain coats and holding umbrellas, the protesters, mostly youngsters, continued to raise slogans against Gotabaya and his brother and former finance minister Basil Rajapaksa.

“We are staying united to fight the evil spirit,” said 28-year-old Chaminda, who works as a teacher. Chaminda’s wife Harini, who runs an apparel store, was seen holding at least 10 raincoats in her hand to give to the protesters who are in need of it. “This is people's power. I was here yesterday. I got my food from the fellow protesters. I don’t know who they are. But they fed me. So, today I brought the rain coats for them,” she says.

As the night fell, the protesters decided to stay back at the Galle Face seafront until Gotabaya leaves office. People were seen putting up temporary canvas tents at the protest site.

Gotabaya held a crucial meeting with the 41 MPs of the Sri Lanka Freedom Party, including former president Maithirpala Sirisena, who had recently quit the ruling dispensation. The meeting was called to discuss ways to find a solution to the ongoing economic crisis and the political stalemate. “The main objective of the meeting is to ensure and convince president Gotabaya to form an interim government which doesn't have anyone from the Rajapaksa family,” Sirisena said in a press conference on Sunday morning.

Though the meeting went on for almost an hour, no media release has been issued till late in the night. Sources close to the government told THE WEEK that the meeting was hushed up as the two sides could not reach an understanding. They also said that Gotabaya was firm that he would not give up and the interim arrangement has to be under him.

Meanwhile, Sajith Premadasa’s main opposition party Samagi Jana Balawegaya (SJB) has announced that it will move a no-confidence motion in the parliament against Gotabaya’s government if it fails to provide immediate relief to the people. Sajith has been demanding that the 20th amendment giving executive powers to the president be abolished.

There is no end in sight for the political stalemate in the island nation while the protesters continue to raise slogans against Gotabaya and the Rajapaksa clan.