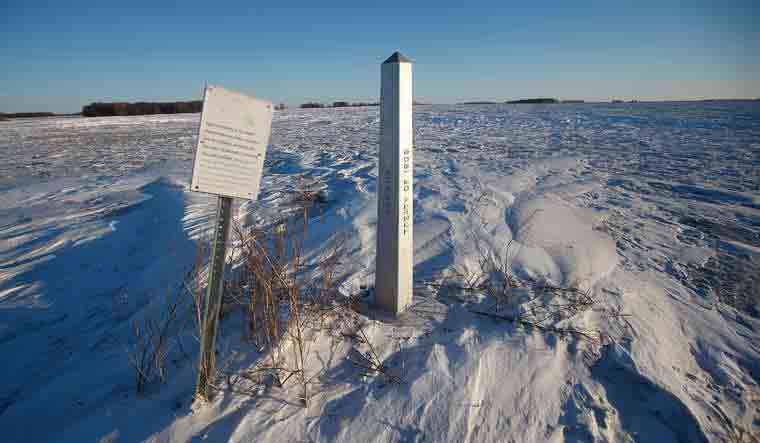 A border marker, between the United States and Canada is shown just outside of Emerson, Manitoba | AP

India has sought consular access to seven individuals, who appear to be Indian, and who have been detained by the US authorities for allegedly being involved in human smuggling across the border from Canada to the US. The people were found without any documentation and were picked up by the US authorities in the border state of Minnesota on January 19.

Two of these persons were admitted to hospital, for treatment after being exposed to extreme cold. One has been discharged now.

Based on information obtained from them, the Canadian authorities launched a search and found four bodies in Manitoba province on the Canadian side of the border. These included a man, a woman, a teenage boy and an infant and they appear to have died due to exposure to extreme cold.

Prima facie, it appears that the deceased as well as those detained are Indians. However, further efforts are underway to identify them and confirm their nationalities. According to sources, the post mortem of the victims is likely to be done on January 24.

Along with the seven, the US authorities have also detained a US citizen, Steve Shand, 47, for alleged involvement in human smuggling activity. Shand is reportedly a resident of Florida.

The group, which reportedly spoke Gujarati, was apparently crossing the border illegally to the US. Two of them were picked up, along with Shand, from a van which the border authorities stopped to probe. Another five were found wandering nearby in the snow drifts on the US side of the border. The deceased, who seemed part of the same group, had got separated in the snow fields due to blizzard -like conditions. The group on the US side had a bag full of baby supplies and it was in their tip that the Canadian authorities were able to find the frozen bodies of the victims. Temperatures here range in the minus 35-to-41-degree C. In addition, there are visible cold winds and best complete darkness in winter.

The entire group had reportedly trekked for over 11 hours through the bleak landscape, which Canadian prime minister Justin Trudeau compared with the lunar surface. "There’s no lights up there. You would have probably been in close to zero visibility," he said, adding that it was easy to get disoriented in such conditions. This is how the team most likely separated, and the four got lost.

The incident evoked shocked reactions. "It was an absolutely mind-blowing story. It’s so tragic to see a family die like that, victims of human traffickers … and of people who took advantage of their desire to build a better life,” Trudeau said.

External affairs ministry S. Jaishankar expressed shock over the tragedy and told the Indian missions in Canada and the US to look into the matter.

The Consulate General of India in Toronto has sent a team to Manitoba to liase with local authorities on investigations regarding the dead people.

On the US side, the Consulate General of India in Chicago has sent a team to Minneapolis, to look into the detention of the seven individuals and render assistance to them. They have sought consular access to the detained persons.

Illegal immigration into the US, across the borders, both on the Canadian and Mexican, is rampant, despite all the patrolling that authorities undertake. The crossings are fraught with risk, yet, people remain undeterred in pursuit of their dream to get into the US.

It is reported that of one the detainees told Border Patrol agents he had paid a lot of money to enter Canada from India under a fraudulently obtained student visa. Canada was only a stepping stone. His destination was Chicago, where his uncle lives. He had crossed the border on foot, expecting to be picked up by someone who would get him to Chicago.