An armed man had entered the shrine, demanding release of terrorist Aafia Siddiqui 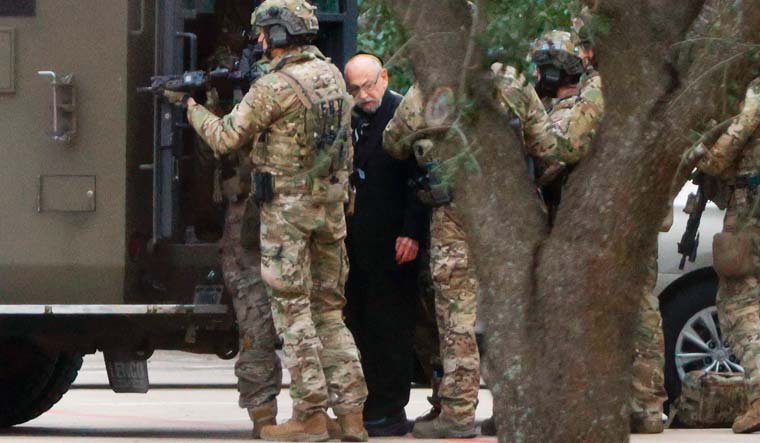 Security personnel escort a hostage out of the Congregation Beth Israel synagogue in Colleyville, Texas | AP

Four people at a Jewish synagogue, including its rabbi, in the US state of Texas were taken hostage on Saturday. Late on Saturday, Texas Governor Greg Abbott announced the hostages had been released, without giving details.

Abbott tweeted “Prayers answered. All hostages are out alive and safe.” There is no clarity on the fate of the hostage-taker.

BBC reported the police had deployed special weapons teams and local people were evacuated. CNN reported both the FBI and Texas Department of Public Safety are assisting the police in dealing with the situation.

The hostage taker could be heard ranting via livestream on the internet, and demanding the release of Aafia Siddiqui, a Pakistani neuroscientist who was convicted of trying to kill US Army officers in Afghanistan.

So, who is Siddiqui? She studied in the United States at Brandeis University and the Massachusetts Institute of Technology. She attracted the attention of American law enforcement in the years after the September 11 attacks. Top FBI and Justice Department described her as an “al-Qaida operative and facilitator” at a May 2004 news conference in which they warned of intelligence showing al-Qaida planned an attack in the coming months. In 2008, she was detained by authorities in Afghanistan. American officials said they found in her possession handwritten notes that discussed the construction of so-called “dirty bombs” and that listed various locations in the US that could be targeted in a “mass casualty attack.” Siddiqui is jailed in a federal prison in Texas.

CAIR, the nation's largest Muslim advocacy group, condemned the incident on Saturday. “This latest antisemitic attack at a house of worship is an unacceptable act of evil,” CAIR National Deputy Director Edward Ahmed Mitchell said in a statement. “We stand in solidarity with the Jewish community, and we pray that law enforcement authorities are able to swiftly and safely free the hostages. No cause can justify or excuse this crime.”