Kazakhstan was an unlikely candidate for civil unrest in Central Asia 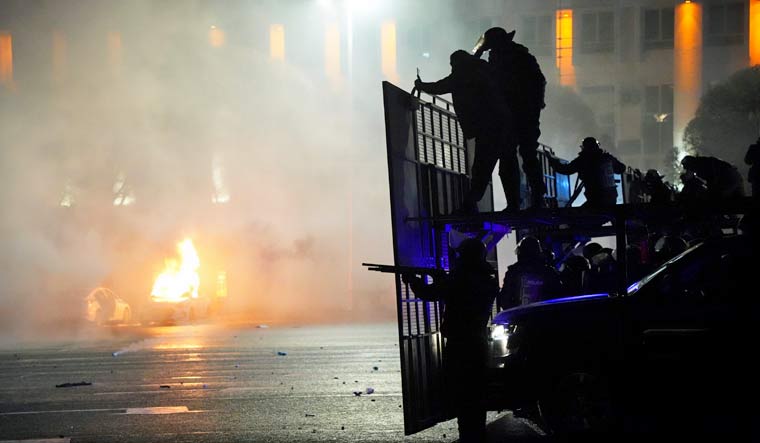 A police car on fire as riot police prepare to stop protesters in the centre of Almaty, Kazakhstan, on Jan. 5, 2022 | AP

The widespread and violent protests that broke out in Kazakhstan on January 2 took not just the government of President Kassym-Jomart Tokayev by surprise but also most analysts.

The landlocked country has an area of approximately 2,724,900 sq km (82 per cent the size of India and as big as Western Europe) but a population of just 19 million. It has 3 per cent of global oil reserves and 12 per cent of uranium reserves (India gets 80 per cent of its uranium from the country). In 2018, Kazakhstan was the world's ninth-largest exporter of coal and crude oil and 12th of natural gas, according to the International Energy Agency.

It is the most developed and richest country in Central Asia and was, therefore, one least likely to witness this type of protest. However, there is a long history of protests in Kazakhstan.

In December 1986, thousands of peaceful students protested against the replacement of the long-serving First Secretary of the Communist Party of Kazakhstan, Dinmukhamed Kunaev (1964–1986), an ethnic Kazakh, by the Russian Gennady Kolbin (1986–1989). The Alma Ata (later known as Almaty) riots followed, resulting in many deaths. It was a demonstration of ethnic Kazakh nationalism.

In 2011 in Zhanaozen, an oil industry hub on the Caspian Sea, dozens were killed in protests triggered by the sacking of oil workers calling for better pay and working conditions.

Though Kazakhstan in post-Soviet times came to be seen as an example of political stability despite a weak civil society, there was increasing public dissatisfaction over accumulated economic and political grievances, resulting in sporadic demonstrations. Grievances include low wages, high inflation, the sale of land to China in 2016, and the lavish spending on the EXPO 2017—all of which created frustration and anger. Nazarbayev sensed the growing public disapproval and resigned in March 2019. His hand-picked successor Kassym-Jomart Tokayev, became the new interim president and won snap elections. His first decision as president was to rename the capital Astana as Nur-Sultan. Nazarbayev, on the other hand, remained the head of the Security Council for life, and the chairperson of the ruling Nur-Otan party. And as “the Leader of the Nation”, Nazarbayev's lifetime title, he would be involved in all key decision-making processes. But it did not go smoothly and there were several small protests calling for a boycott of the elections, some people chanting “No to the dictatorship”.

The protests started in the town of Zhanaozen, in the oil-rich western Mangystau region, sparked by the lifting of price caps on liquefied petroleum gas (LPG), which doubled overnight. Most people use LPG to run their vehicles, hence it directly affects them. Soon the protests spread to other cities and expanded to include demands for economic and political reforms. They soon degenerated into violence, arson, and loot. An affluent and aspirational middle class, as well as a set of ultrarich tycoons, cannot hide financial hardship for the majority, aggravated by the economic downturn in the KOVID times. Together with rampant corruption, especially by the family of former President Nursultan Nazarbayev, it has created disenchantment and anger among the vast majority.

The public anger is directed at Nazarbayev, who is 81 and had ruled Kazakhstan since 1989 before handing over power to his hand-picked successor Tokayev in 2019. Many protesters shouted “old man out!” in reference to Nazarbayev, and his statue was pulled down in the southern city of Taldykorgan. His nephew Samat Abish, deputy head of the main security service and several other close associates have been purged. According to some experts, the riots in Almaty are an attempt by members of Nazarbayev’s political clan to reassert their position. The crisis has thus exposed the infighting at the very top of the government.

In a bid to placate the protesters, the government cut the price of gas. The President dismissed the entire government and declared a state of emergency in several areas. When the violence didn’t stop, he changed his conciliatory approach and authorised security forces to shoot without warning. He described the protesters as “terrorists” trying to bring Coup d’état with “foreign” support. He invited the Collective Security Treaty Organisation forces, a Russian-led military alliance. The more than 2,000 CSTO troops have been able to stabilise the situation. The internet and social media have become new tools for the awakened citizenry. During the recent protests, authorities shut down internet access across the country for days.

One result of the crisis is already evident. Tokayev has strengthened his position, by taking over from Nazarbayev as head of the powerful security council and removing and arresting his protégé Karim Masimov. He has also asked the acting prime minister Alikhan Smailov to take on the job permanently. He has given indications of addressing some of the demands of the protesters for economic and political reforms.

The protests reverberated across the region. Russian President Vladimir Putin has vowed not to allow “colour revolutions” (a reference to regime changes) to take place. Kremlin also criticized the role of social media in fuelling the protests. This will surely increase Russia’s influence in Kazakhstan, with which it shares a 7,644km border.

More than 20 per cent of the Kazakh population is of Russian origin and they are concentrated in the northern region which borders Russia. Moscow wants to protect the interest of ethnic Russians and keep Kazakhstan and other post-Soviet States in its area of influence, keeping out not just US and the West, but also its “close ally” China.

CSTO and the Eurasian Economic Union are the security and economic initiatives, respectively, to achieve these objectives and Kazakhstan is a member of both. Any regime change in the country could have a Domino effect in the neighbourhood, including Russia.

Kazakhstan’s other great neighbour China has more than $35 billion investment and destination of nearly one-fifth of its hydrocarbon exports. China has supported President Tokayev and wants the country to protect its investments etc.

The US and EU are worried that Russian forces might stay put in Kazakhstan and warned the country in this regard. However, according to the latest reports the Moscow-led CSTO forces, often seen as Russia answer to NATO, have started withdrawing from the Central Asian country.

The coming days will decide not just the future of Kazakhstan, but geopolitics in the entire region.