Currently, those born after 1997 cannot flee Hong Kong under the BNO visa scheme 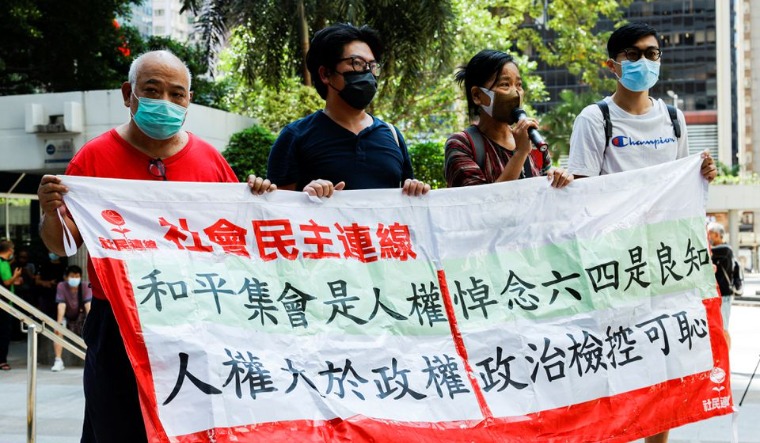 Pro-democracy activists shout slogans outside the court to support activists charged for participating in the assembly on June 4 to commemorate the 1989 crackdown on protesters in and around Beijing's Tiananmen Square, in Hong Kong, China, September 15, 2021 | Reuters

British MPs are calling for new laws so that Hong Kongers being persecuted with protest charges find it easy to flee to the UK. Nine of the ten Hong Kong citizens facing sedition charges are too young to access the UK visa scheme that will help them flee the country.

Currently, those born after 1997 cannot flee Hong Kong under the BNO visa scheme unless accompanied by a parent with BNO status. Over 10,000 people were arrested during or after the mass protests that swept Hong Kong in 2019. 93 per cent of more than 1,000 who were tried by July this year were under the age of 25. a parliamentary vote to resolve the issue and make it easier for those under 25 to move to the UK is expected to take place in December.

MPs from the Conservative party moved for an amendment in the law after Hong Kong Watch, an advocacy group released numbers that showed how those in need of using the BNO visa were mostly under 25. the group presented the numbers at a parliamentary debate this week.

The crackdown following the imposition of the National Security Law has caused a lot of those who were a part of massive protests in 2019 to flee Hong Kong. Several of them managed to flee to European nations and the UK. A lot of them fled to Taiwan too.

With an amendment to the Nationality and Borders Bill, British MPs will close a loophole enabling more protesters to move to the UK.