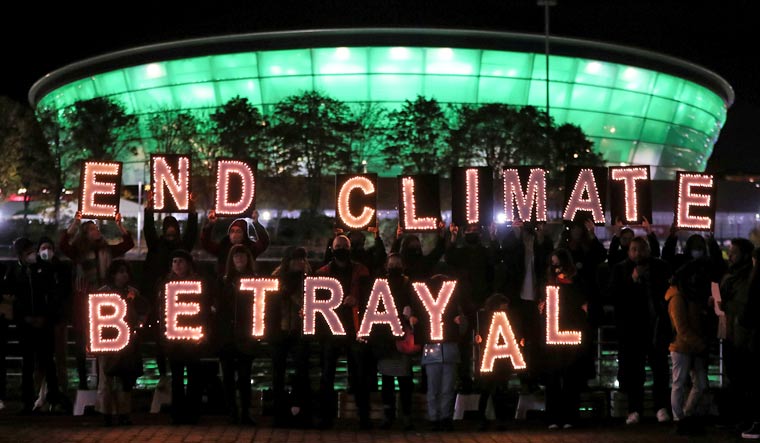 Climate youth activists display a message during a protest opposite the venue for the UN Climate Change Conference (COP26) in Glasgow, Scotland, Britain November 2, 2021 | Reuters

Just over a week after some 200 nations struck an agreement aimed at intensifying global efforts to fight climate change, the finance minister of France warned on Sunday that the cost of the energy transition will be much higher than expected.

We should never underestimate the price of the climate transition, Bruno Le Maire told reporters in Abu Dhabi, the oil-rich capital of the United Arab Emirates.

Reveling in France's strong economic rebound from the devastation of the pandemic, Le Maire was in the Gulf Arab sheikhdom to discuss joint investments in a wide range of fields, from port infrastructure to hydrogen fuel and renewable energy.

The UAE has publicly pledged to have net zero carbon emissions by 2050, among a list of countries that made the long-range, still-vague commitment before the climate summit in Glasgow opened earlier this month.

Even as the country with the region's first nuclear power plant tries to position itself as a leader on environmental issues, the hydrocarbon-rich UAE's economy feeds on petrodollars.

Le Maire noted the challenges facing industrialised economies if they shift away from the cheap fuel pumped out of the Persian Gulf toward renewable energy sources.

We don't want the people with the lowest income to pay for the climate transition, he said, acknowledging lessons learned from the carbon tax aimed at encouraging alternative energy use that sparked France's mass so-called Yellow Vest protest movement in 2018.

To help bridge the energy transition, Le Maire stressed the need to fund new energy technologies, adding that France's faster cooperation with the UAE in the field is of the highest value.

The UAE and France have become increasingly aligned in recent years, sharing a mistrust of political Islam across the Middle East.

Major French aviation and defense companies have powered growth in the emirates, home to over 30,000 French citizens.

Le Maire on Sunday toured Abu Dhabi's outpost of the Louvre, which draws visitors to artifacts on loan from the Paris museum.

Le Maire, a close partner of President Emmanuel Macron who's now gearing up for a re-election campaign, touted France's mass vaccinations that he said fuelled the economy's expected 6.25 per cent growth rate for the year.

We are not in the position of other European countries, he said, as Austria lurches into lockdown to stem its worst wave of coronavirus infections.

"[Lockdowns] have a very negative impact on the economy and that's the exactly the kind of situation we want to avoid."