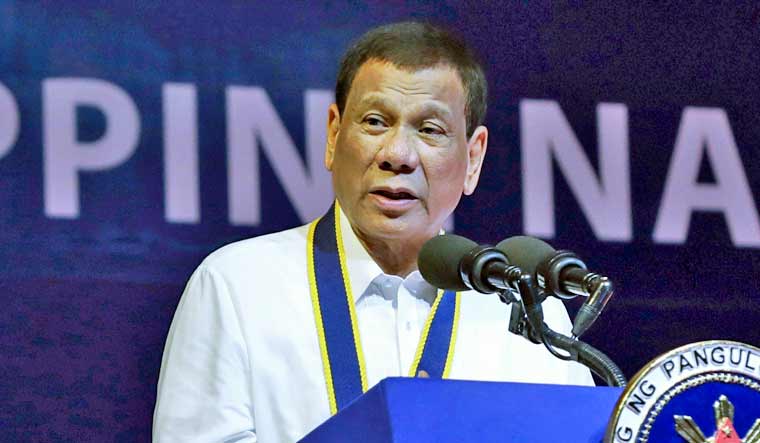 Philippine President Rodrigo Duterte's daughter on Saturday registered her candidacy for vice president in next year's elections and was chosen as the running mate of Ferdinand Marcos Jr., the late dictator's son, in an alliance that has alarmed human rights activists.

Sara Duterte backed out this week from her reelection bid as mayor of southern Davao city then took the place of a largely unknown vice-presidential candidate of her political party, Lakas CMD, in a maneuver that allowed her to seek the second-highest post even after a deadline lapsed for candidates in the May 9 elections.

In a chaotic turn of events that bolstered speculations of a discord between the president and his daughter, the elder Duterte suddenly trooped to the elections commission Saturday to accompany his former aide, Sen. Bong Go, who shifted his vice-presidential candidacy to a presidential run.

Duterte may even reconsider his earlier plan, which he has dropped, to run for vice president, said Communications Secretary Martin Andanar.

Such a race would pit the president, who is constitutionally limited to a single six-year term, against his daughter.

Philippine presidents and vice presidents are elected separately and could forge an alliance even if they run under different political parties.

If they're elected from rival camps, they often end up in a hostile relationship.

Ferdinand Marcos, who was toppled in a 1986 people power pro-democracy uprising and died in U.S. exile three years later, and the current president both have been criticised for gross human rights abuses.

Marcos had placed the Philippines under martial law in 1972 in an era that was marked by widespread atrocities and economic plunder.

Duterte has been condemned by Western governments and human rights groups for a brutal anti-drugs crackdown that has left more than 6,000 mostly poor suspects dead in large-scale killings that are being investigated by the International Criminal Court.

The Marcos-Duterte tandem is the biggest threat to the democratic aspirations of the people, said Renato Reyes of Bayan, a prominent left-wing coalition.

It has the most self-serving aims: a Marcos restoration and the protection of outgoing President Rodrigo Duterte.

Reyes said the Duterte-Marcos alliance serves only the narrow interests of their dynastic families.

His group immediately launched an online protest and scheduled a rally at the Commission on Human Rights on Sunday.

There were no immediate comments from Sara Duterte or Marcos Jr., a former senator and provincial governor who is widely known by his nickname Bongbong.

Initially, Duterte and his ruling party wanted his daughter to succeed him. That prospect has renewed calls for Philippine Congress to enact a law to enforce a constitutional prohibition against political dynasties in a Southeast Asian country where powerful and wealthy clans have dominated local politics for generations.

The 43-year-old Sara, a mother of three and a lawyer like her father, has been a longtime mayor of Davao, an economically vibrant city where the elder Duterte first carved a political name with his populist rhetoric and often bloody approach against criminality, especially the widespread trafficking and use of illegal drugs, before he rose to the presidency in 2016.

Duterte's rule, which ends in June next year, became one of the most tumultuous and controversial in Philippine history, after Marcos. The ailing president, known for his brash rhetoric and expletive-laden outbursts against domestic critics, Western leaders and even the pope, initially planned to run for vice president.

But he backed out from his vice presidential aspiration after his popularity ratings dropped and prompted him to announce his retirement early last month although he has walked back on such public declarations in the past.

The president has said he was ready to face a possible array of criminal complaints for his deadly campaign against illegal drugs when he steps down but would never cooperate with the International Criminal Court's investigation.

Marcos Jr.'s father died in exile in Hawaii in 1989 without admitting any wrongdoing, including accusations that he and his family amassed an estimated $5 billion to $10 billion while he was in power.

Marcos Jr. has called the allegations against his father lies.

At least six groups of petitioners have asked the elections commission to either cancel or reject Marcos Jr.'s candidacy, citing a 1995 tax evasion conviction. He has played down the petition as the work of political opponents.

At least six key candidates have declared their intention to succeed Duterte, including Vice President Leni Robredo, the opposition leader who narrowly defeated Marcos Jr. in the 2016 vice presidential race.