Xi has emerged the most powerful leader since 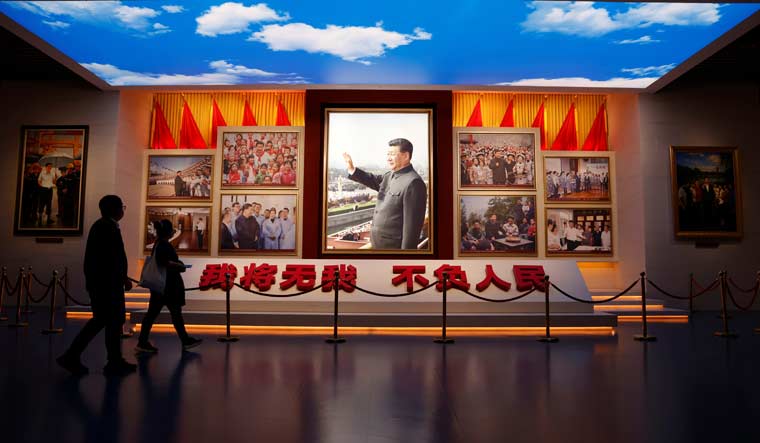 Visitors walk past images of Chinese President Xi Jinping at the Museum of the Communist Party of China in Beijing, November 11, 2021 | Reuters

A high-profile conclave of China's ruling Communist Party on Thursday adopted a landmark resolution to cement President Xi Jinping's "core" status in the country's political history and cleared the decks for him to extend his rule for a record third term next year and perhaps beyond.

The resolution - the only third of its kind in the party's 100-year history after one issued under party founder Mao Zedong and his successor Deng Xiaoping - was reviewed and adopted at the sixth plenary session of the 19th CPC Central Committee, held in Beijing from November 8 to 11, an official communique released at the end of the meeting said.

The 14-page communique eulogising Xi's leadership and his "core" status in the party makes it explicitly clear that he would continue in power for an unprecedented third term after completing his second five-year term next year and perhaps beyond not retiring unlike his predecessors.

The Plenum, attended by about 400 senior party leaders, decided to advance next year's once-in-a-five-year party Congress to the middle of the year from towards the end where Xi's third term was formally expected to be approved.

Xi, 68, known as a 'princeling' as he is the son of former vice premier Xi Zhongxun who was persecuted by Mao for his liberal views, rose to ranks steadily becoming Vice President under the previous President Hu Jintao.

While he had the image of a sedate leader in his previous postings, he transformed himself into most ambitious and powerful leader soon after he took over leadership of the party in 2012 immediately followed by the Presidency and the Chairman of the Central Military Commission (CMC), the overall high command of the 2-million strong Chinese military.

He quickly consolidated his power by launching a massive anti-corruption campaign in which over a million officials including over 50 top generals of the military besides senior party leaders were punished.

He also emerged as "core leader" ending the collective leadership system followed by his predecessors.

"He is trying to cast himself as the hero in the epic of China's national journey," said Adam Ni, editor of China Neican, a newsletter on Chinese current affairs.

"By pushing through a historical resolution that puts himself at the centre of the grand narrative of the Party and modern China, Xi is demonstrating his power. But the document is also a tool to help him retain this power," he told BBC.

"(Former leaders) Hu Jintao and Jiang Zemin never had as much consolidated authority as Xi. There is certainly a lot of emphasis on Xi as a person at present. The degree to which it becomes more formally institutionalised is what many are watching out for at the moment," he said.

Thursday's Plenum resolution left no doubt about his absolute power stating the meeting resolutely has upheld Comrade Xi Jinping's core position on the Central Committee and in the Party.

"It was stressed at the session that Chinese communists, with Comrade Xi Jinping as their chief representative, have established Xi Jinping Thought on Socialism with Chinese Characteristics for a New Era on the basis of adapting the basic tenets of Marxism to China's specific realities, the communique said.

"Comrade Xi Jinping, through meticulous assessment and deep reflection on a number of major theoretical and practical questions regarding the cause of the Party and the country in the new era, has set forth a series of original new ideas, thoughts, and strategies on national governance revolving around the major questions, it said.

"The Party has established Comrade Xi Jinping's core position on the Party Central Committee and in the Party as a whole," it said.

Also the Plenum highlighted the unprecedented growth and power of the Chinese military under Xi.

"The People's Liberation Army (PLA) continued to grow in strength, and the humiliating diplomacy of old China was put to an end," it said.

With regard to national defence and the armed forces, the people's military has been through an all-around revolutionary restructuring in preparation for the next stage, while our defence capabilities have grown in step with our economic strength.

"Our people's military, firmly carrying out the missions of the new era, has taken concrete actions to safeguard our national sovereignty, security, and development interests with an indomitable fighting spirit, it said, amidst China's territorial dispute with India. China also has maritime disputes with Vietnam, the Philippines, Malaysia, Brunei and Taiwan in the South China Sea.

On "national security, we have enhanced security on all fronts and withstood the many political, economic, ideological, and natural risks, challenges, and trials" ensuring lasting stability, it said.

On the issue of Taiwan, the resolution underlined that China was firmly opposed to the idea of the self-ruled island seeking independence. It also voiced opposition to any foreign interference on the Taiwan issue.

"We firmly oppose separatist activities seeking Taiwan independence. We firmly oppose foreign interference. We have maintained the initiative and ability to steer cross-Strait relations," it said.

"On foreign affairs, we have advanced major-country diplomacy with Chinese characteristics on all fronts. China has broken new ground in its diplomatic endeavours amid profound global changes and turned crises into opportunities amid complex situations on the international stage, it said.

"These efforts have resulted in a marked increase in China's international influence, appeal, and power to shape, it said.

The document, a summary of the party's 100-year history, addresses its key achievements and future directions, which observers say makes a strong case for Xi's continuation in power considering the turbulent phase China is passing with the US and major powers in the world uniting to contain its rise.

Politically, the meeting is regarded as significant for Xi who - in the last nine years of his tenure in power has significantly consolidated his power emerging as the most powerful leader after Mao.