Several of the displaced people have fled to India 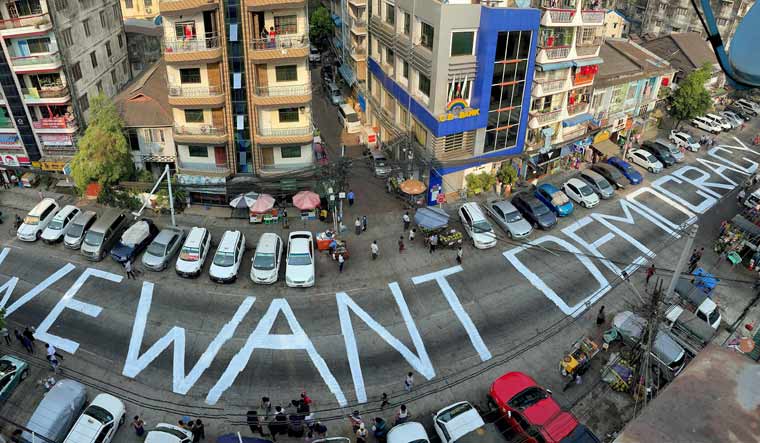 File image: A slogan is written on a street as a protest after the coup in Yangon, Myanmar February 21, 2021 | Reuters

About 37,000 people, including women and children, are now displaced in Myanmar's restive northwest and many have fled their homes in anticipation of the current fighting, including into India, a spokesperson for UN Secretary-General Antonio Guterres said.

The UN team in Myanmar remains deeply concerned over the recent escalation in fighting in the northwest between the Myanmar Military and the local Popular Defence Forces in Chin State, as well as Magway and Sagaing regions, Associate Spokesperson for the Secretary-General Florencia Soto Nino said at the daily press briefing on Monday.

She said this has led to more people being displaced and the property being destroyed, nine months after the military seized control over the Government of Myanmar on February 1. There have also been worrying reports in recent days of the shelling and burning of more than 160 houses of civilians in the town of Thantlang in western Chin.

Our humanitarian colleagues say that some 37,000 people, including women and children, are now displaced in the country's northwest. Many have fled their homes in anticipation of the current fighting, including into India, Nino said, adding that this is in addition to more than 7,000 people who remain displaced from the previous fighting since December 2019.

The UN team repeats its calls for parties to the conflict to meet their obligations under international humanitarian law to protect civilians and humanitarians, and reiterates that aid workers and their properties should never be a target, she said.

The Myanmar military staged a coup on February 1 this year, nullifying the results of the November 2020 elections and imposed a state of emergency after detaining hundreds of activists, civil servants and politicians, including Nobel laureate Aung San Suu Kyi and other leaders of her National League for Democracy (NLD).

The military staged the coup amid its rising friction with the ruling NLD government over the results of the November 8 general election. The NLD had registered a thumping victory in the polls. However, the military had alleged discrepancies in the electoral process.

The democratic transition in Myanmar had taken place in 2011 after decades of military rule.