Biden stressed that he wants to compete against China, rather than have conflict 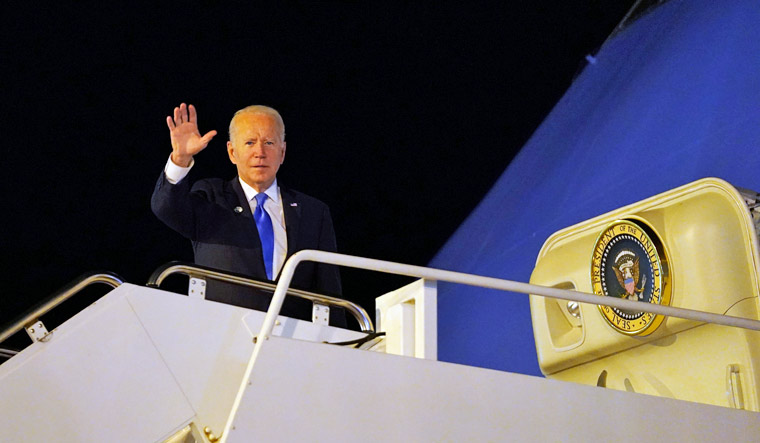 Over five days abroad at two global summits, President Joe Biden showed a new willingness to openly confront China over climate change and its lack of leadership on the global stage.

Biden ended his time at the U.N. climate summit in Scotland on Tuesday by chastising Chinese President Xi Jinping for physically skipping the event and failing to make the level of commitments that roughly 100 other nations did to curb greenhouse gasses. Xi also avoided the earlier Group of 20 summit in Rome, allowing Biden to dominate the conversation as he met with his French, Italian, British and German counterparts.

"We showed up, and by showing up we've had a profound impact on the way I think the rest of the world is looking at the United States in its leadership role," Biden said at a Tuesday news conference wrapping up his trip abroad. Biden added that China had made a big mistake in bypassing the events because they've lost an ability to influence people around the world.

But Biden's global progress and willingness to challenge China  a stance that also was critical to the rise of his predecessor Donald Trump  may be lost in the fog of domestic politics.

Biden jetted back to Washington to confront his deepest challenge yet as he struggles to pass $3 trillion in new government spending, including $555 billion to combat climate change. His poll numbers are flagging. The headwinds could worsen in Congress, where a wave of retirements bodes poorly for holding on to Democratic majorities in next year's elections.

The president stressed that he wants to compete against China, rather than have conflict. But he also showed a new strategy of using climate as a cudgel against Beijing.

White House national security adviser Jake Sullivan told reporters during the trip that China has an obligation to step up on climate and the U.S. will keep pressing Beijing. One tool might be economic penalties: Biden brokered a deal with the European Union to block dirty steel made possible by Chinese coal plants.

The president outlined his thinking by quoting his father at Tuesday's news conference.

My dad had an expression. He said the only conflict worse than one that's intended is the one that's unintended, the president said, adding that he wants to make sure in an upcoming virtual meeting with Xi that there are no misunderstandings.

Biden was well-received on the world stage, where he shared backslaps, handshakes and elbow-bumps with global leaders across two major international summits, with European Commission President Ursula von der Leyden referring to him as dear Joe. He scored victories on key priorities like a global minimum tax on corporations and boosted global commitments to combat climate change.

Biden insisted no world leaders had been pressing him on the fate of the budget and climate legislation back in Washington and he expressed confidence in its passage. But members of his own party are growing impatient at the delays in settling intraparty conflicts over the matter.

Since he launched his presidential campaign in 2015, Biden has cast the 21st century as a generational struggle between democracies and autocracies  principally the rising threat from China.

As much as the five-day European trip was meant to promote Biden's message that America is back, it also was meant to highlight why he believes the U.S. must reengage with the world after four years of isolation. The president worked to forge new alliances and coalitions meant to contain Beijing from all sides, and on a host of economic, security and environmental issues.

Asked why American should commit to cutting emissions when China and Russia have not done likewise to the same degree  a frequent complaint that his predecessor cited to justify withdrawing from the 2015 Paris climate accord  Biden answered forcefully: Because we want to be able to breathe, and we want to be able to lead the world.

Biden issued a rare public mea culpa during the climate summit for America's step away from leadership on climate during the Trump administration.

Those of us who are responsible for much of the deforestation and all of the problems we have so far, Biden said, have overwhelming obligations to the poorer nations that account for few of the emissions yet are paying a price as the planet has grown hotter.

As for Trump's action, he said: I shouldn't apologize, but I do apologize for the fact the United States, the last administration, pulled out of the Paris accords and put us sort of behind the eight ball a little bit.

Biden also eased a trade war with Europe that threatened to raise prices on goods in the U.S. and harm American exports ranging from motorcycles to whiskey. The new agreement would still block Chinese steel production that is coal dependent and allow his administration to devote its focus to renewed trade talks with China, as Biden maintains Trump's pressures in a simmering economic conflict.

But the fundamental challenge between China and the U.S. on climate might be an incompatible set of world views. Biden sees the efforts to limit global warming as an opportunity to create jobs and boost economic growth as the U.S. becomes more innovative. He pronounced the next decade crucial for getting climate change under control.

China, for its part, still sees coal and oil as necessary to keep fueling an economy that is now the second-largest in the world. The country's lead negotiator at the U.N. summit said China must first become wealthier before it can transition faster to renewable energy.

So regarding the fact that China is the current largest emitter, it's because China is at a special development stage, said Xie Zhenhua. China, Xie added, can accelerate its emission cuts later.

The US, too, still has plenty of work to do. It gets most of its energy from natural gas, and from a significant amount of coal, and Biden acknowledged during the trip that the U.S. is pushing the Gulf to pump more oil to ease gasoline prices.

China itself has committed to have a carbon neutral economy by 2060, 10 years after the US The question for Biden might be how much of a difference those 10 years could make for the world's two leading powers.