David Amess stabbing: Priti Patel says MPs should be not cowed by attack

Patel has called for an immediate review of MP's security 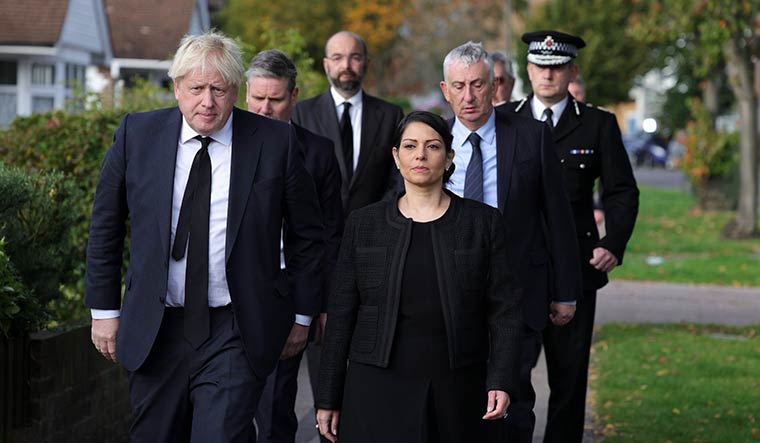 A day after a long-serving Conservative Party MP was stabbed to death in what has since been dubbed a "terrorist" incident, tributes have flowed in from across the aisle, as well as renewed concerns over the security of British politicians.

Sir David Amess, 69, was stabbed by a 25-year-old man while visiting a church at a constituency event in Leigh-on-Sea on morning morning.

After visiting the Belfairs Methodist Church where the attack took place along with Prime Minister Boris Johnson, she said Amess was a "man of the people" who was killed "doing a job he loved".

"We are all struggling to come to terms with the fact that David Amess has been so cruelly taken away from all of us," she said, adding that Amess was a much loved parliamentarian, a dear and loyal friend, and a devoted husband and father.

Johnson called him "one of the kindest, nicest, most gentle people in politics". Labour Party leader Keir starmer said he was a "dedicated public servant with a profound sense of duty," adding that Amess's Catholicism was central to his political life and that he was highly respected across Parliament.

Irish President Michael D. Higgins extended his condolences: "May I express my deepest sympathies to the family, friends, colleagues in parliament and constituents of Sir David Amess, who was murdered while carrying out that most fundamental act of a politician, meeting with his constituents, assisting them with their issues."

Government sources told the BBC that the attacker was a UK national who appears to be of Somali heritage. The BBC report added that the man was not on any database of terror suspects. The Metropolitan Police said they were carrying out searches at two addresses in the London area and are not seeking anyone else over the killing, believing that the man acted alone.