Junta alleges pressure from US, EU led to decision 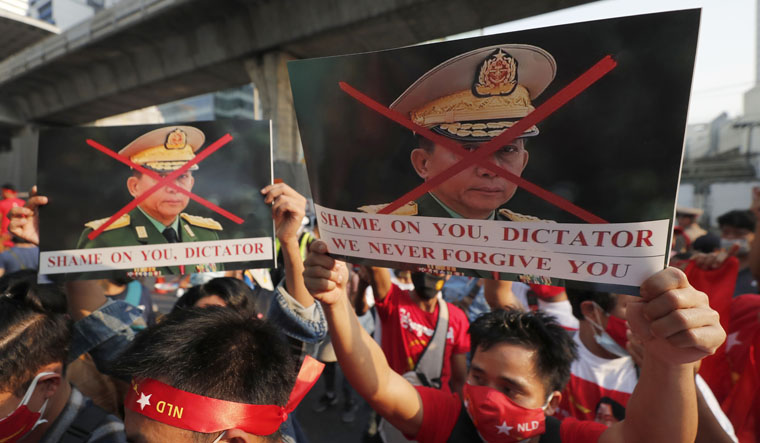 In a snub to the leader of Myanmar's military government, the Association of Southeast Asian NAtions (ASSEAN) decided to exclude junta chief Min Aung Hlaing from a regional summit, opting to invite a non-political representative from Myanmar instead.

The move comes after the junta denied permission for an ASEAN envoy to meet former leader Aung San Suu Kyi, as she was "charged with crimes".

It adds to growing unease between Myanmar's post-coup military leadership and the international fora that the country was part of. On October 14, United Nations Secretary General Antonio Guterres postponed a virtual meeting with ASEAN ministers to avoid having Myanmar's military junta envoy in the same room as official envoys of other southeast asian countries--a situation that would have signalled international recognition of the military government. The Myanmarese junta called the delay politically motivated and said the U.N. and other countries and organisations "should avoid double standards when they are engaging in international affairs".

Following the military coup in June, the United Nations General Assembly adopted a resolution condemning Myanmar's military leaders and called for a halt in arms sales to the country. At the 75th UN General Assembly in September, Myanmar's seat was left vacant. Besides Myanmar, Afghanistan was also dropped from the list of speakers. Both the Taliban and the Myanmarese junta have protested their official UN representatives, saying they were appointed by governments that are no longer in power.

Singapore's foreign ministry on Saturday said the move to exclude the junta chief from the ASEAN summit was a "difficult, but necessary, decision to uphold ASEAN’s credibility".

The junta in turn blamed foreign intervention for ASEAN's decision. "The foreign interventions can also be seen here," junta spokesperson Zaw Min Tun told BBC Burmese. "We learned that some envoys from some countries met with U.S. foreign affairs and received pressure from EU."

A non-political representative will instead be invited to the October 26-28 summit, ASEAN chair Brunei said. "As there had been insufficient progress... as well as concerns over Myanmar’s commitment, in particular on establishing constructive dialogue among all concerned parties, some ASEAN Member States recommended that ASEAN give space to Myanmar to restore its internal affairs and return to normalcy," Brunei said in a statement.