Legendary tennis player has often been critical of Modi 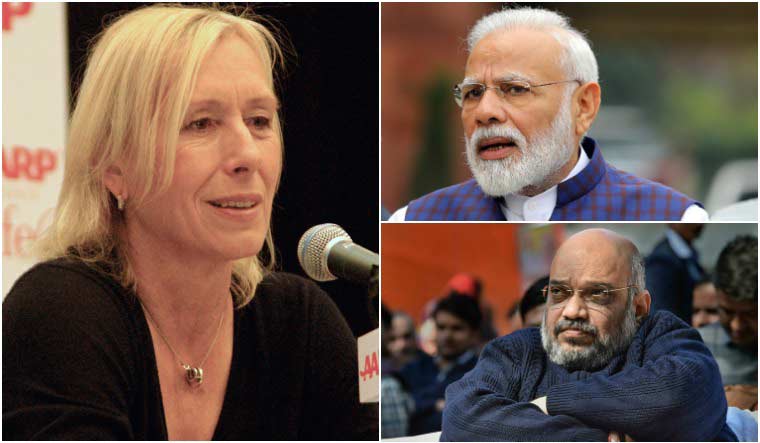 When legendary tennis player Martina Navratilova saw a news story relating Amit Shah’s comment that Prime Minister Narendra Modi was “not a dictator” but rather the “most democratic leader” India had ever seen, her reaction was to tweet, “And for my next joke...” followed by a clown emoji.

The Czech-American, granted asylum in the United States after she was stripped of citizenship from Czechoslovakia in 1975, is among the most successful female tennis players of all time, with 18 Grand Slam singles titles, 31 major women’s doubles titles, and 10 major mixed doubles titles.

She has, in a past tweet, accused Modi (and former US President Donald Trump) of “trying to stifle the truth as much as possible, if that truth doesn’t suit their political purpose”.

Not sure why you are trying to say here but the truth is that the people in power, like Modi and like trump, are trying to stifle the truth as much as possible, if that truth doesn’t suit their political purpose. So there is that….
So I stand by that post, thank you

She first tweeted about Modi following the enactment of the National Registry of Citizens in Assam in 2019, when she shared an article about the policy turning four million people accused of being “infiltrators” stateless, saying Modi and Trump shared the same school of thought.

4 Million Indian Citizens Could Be Made Stateless Tomorrow. Here’s What to Know - TIME- sounds familiar? Modi and trump- if not the same school, certainly the same school of thought. Ridiculous... https://t.co/7uVzMEZiMg

The farmers protests, which have run on for over a year, saw several foreign celebrities speak up in their support. The catalyst, in February 2021, was a tweet by Rihanna, which shared a story about the protests asking “Why aren’t we talking about this?!” to her 100.9 million Twitter followers. Her tweet led to several global voices adding their support for the farmers protests, including Greta Thunberg, YouTuber Lilly Singh, climate activist Jamie Margolin and UK MP Claudia Webbe, among others.

However, a counter-effect also followed. The Ministry of External Affairs issued a statement urging people to ascertain the facts “before rushing to comment on such matters...the temptation of sensationalist social media hashtags and comments ,especially when resorted to by celebrities and others, is neither accurate nor responsible”. The MEA later issued a statement claiming “vested interest groups” were trying to mobilise international support against India, and cited instances of statues of Mahatma Gandhi being vandalised.

It also sparked a response from several Indian celebrities, most of whom had seldom commented on the protests until then. Both Akshay Kumar and Saina Nehwal tweeted the same message calling for “an amicable resolution”, while sharing the MEA’s statement. Sachin Tendulkar was among the most prominent critics of the pop-star, tweeting “Indians know India and should decide for India. Let’s remain united as a nation”.

The Maharashtra government later said it would investigate whether celebrities were “under pressure” by the BJP government to tweet in support of the farm laws.

It remains to be seen whether Navratilova’s comment will result in the same chain reaction.