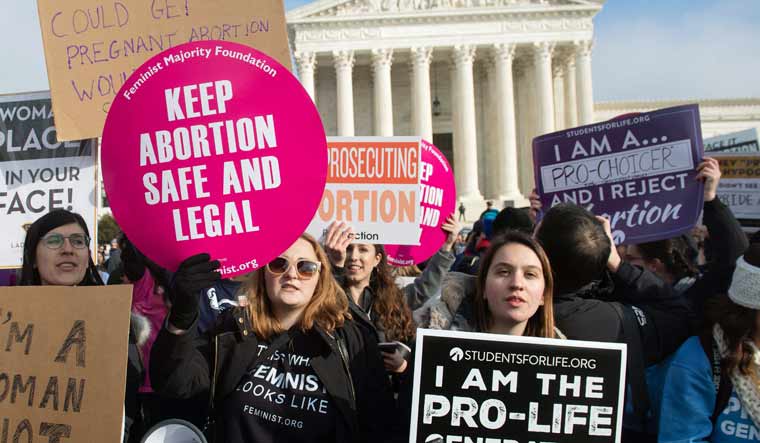 [File] Pro-choice activists hold signs alongside anti-abortion activists participating in the "March for Life," an annual event to mark the anniversary of the 1973 Supreme Court case Roe v. Wade, which legalized abortion in the US, outside the US Supreme Court in Washington, DC | AFP

A Texas doctor has openly admitted to performing an abortion after the state enacted strict laws outlying the procedure in most cases. Writing in the Washington Post, Dr Alan Braid said he provided an abortion to a woman on September 6--five days after Texas enacted the United States' strictest anti-abortion laws--and said he did so because he had "a duty of care to this patient".

Braid, who began practising in obstetrics and gynaecology at a San Antonio hospital in 1972, recollected his experience seeing teenagers die following botched and illegal abortions in the years prior to the landmark 1973 Roe vs Wade judgement that made abortion a fundamental right.

"In medical school in Texas, we’d been taught that abortion was an integral part of women’s health care. When the Supreme Court issued its ruling in Roe v. Wade in 1973, recognizing abortion as a constitutional right, it enabled me to do the job I was trained to do," he wrote.

"I understand that by providing an abortion beyond the new legal limit, I am taking a personal risk, but it’s something I believe in strongly," he wrote.

He decision to disobey the law accompanies his clinic being among the plaintiffs in a federal lawsuit aimed at stopping Senate Bill 8 (S.B. 8), which was signed by Republican Governor Greg Abbott in May.

The bill bans abortions after six weeks of pregnancy and allows private parties to file civil lawsuits against anyone performing or "aiding and abetting" an abortion, and allows plaintiffs to collect a minimum of $10,000 for each abortion challenged.

The US Supreme Court, within which former President Donald Trump appointed three conservative justices known to oppose abortion, in a 5-4 vote recently denied an emergency application to block the law from taking effect.

The Biden administration's Justice Department has already launched a legal challenge on the law, saying the state had no authority to defy the Constitution and deprive women of their rights. Meanwhile, several other state legislators have reportedly considered taking up Texas' approach to abortion.

Anti-abortion group Texas Right for Life has noted Braid's action, with John Seago, its legislative director, calling it a legal stunt but noting that the group was looking into whether "it is more than that". He told the Wall Street Journal that the law contained a four-year statute of limitations for citizens to sue for violations.

Braid has challenged abortion legislations in the past. In 2015, he built a $3 million abortion facility in San Antonio following a law that mandated that abortions be performed at ambulatory surgical centres. This meant smaller clinics would no longer be able to provide services. So, Dr Braid built his own centre to meet the demand.