Explained: Who will replace Yoshihide Suga in Japan

Two of the four candidates are women, a historic first for Japan 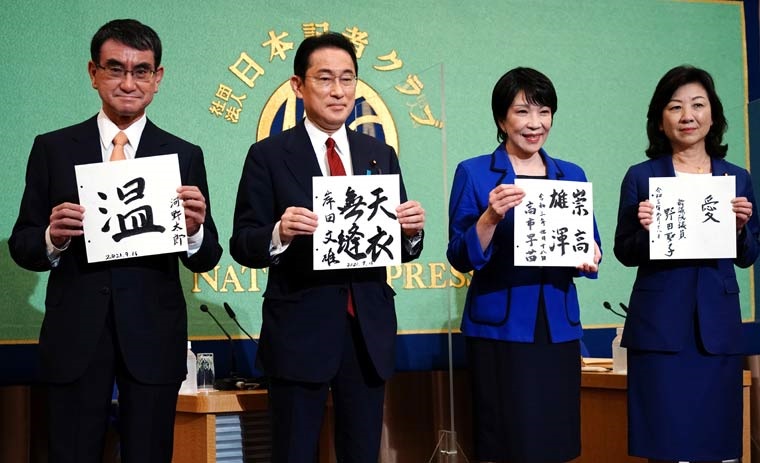 "Japan doesn't have the Taliban. Why is women's participation falling so far behind?" asked Seiko Noda at a press conference, when noting the prominent absence of women in Japanese politics. In a country with fewer women in government than Saudi Arabia, Noda—a former internal affairs minister—is one out of four candidate running to become Japan's next prime minister, succeeding Yoshihide Suga.

In a historic first, two of the four candidates this time are women. Noda's rival here is Sanae Takaichi, who was Noda's predecessor as internal affairs minister.

Takaichi, 60, is a seven-time member of the House of Representatives, is represents the more conservative side of the ruling Liberal Democratic Party. She has often visited the controversial Yasukuni war shrine (which honours those who died in Japan's wars from 1868 to the present era) and has called for Japan to strengthen its military. A former television host presenter herself, in 2016--as Minister of Internal Affairs and Communication--she warned broadcasters that their licenses could be revoked if they failed to have programs that are "politically fair". She considers herself a discipline of Shinzo Abe and has said she would continue his economic "Abenomics" policies, including reigning in inflation.

Noda, also 60, is comparatively more liberal and has criticised Abe's policies. Also a former internal affairs minister, she had also held the portfolio for women's empowerment. The mother of a disabled son, she has spoken publicly about the stigma that the disabled face in Japan, particularly during the 2016's horrific mass killing of 19 people at a facility for those with intellectual disabilities. As the LDP's executive acting secretary, she says if elected prime minister, she would reinvestigate a document scandal that involved senior members of Abe's government. However, her military views are hawkish; as a former defence minister, she had supported Japan setting up enemy base strike capabilities. She had also cancelled Japan's planned deployment of the US Aegis Ashore ballistic missile defence system, citing cost overruns and fears that rocket boosters could fall and land on civilian settlements.

But neither Noda nor Takaichi are frontrunners for the top post. Surveys show that maverick politician Taro Kono, the minister in charge of vaccines, could take home the race. Younger than his peers, at 58, he is seen as someone who might shake up the established order. US-educated, English speaking, and popular among the youth, he poses a threat to more veteran politicians.

The veteran in the mix is Former Foreign Minister Fumio Kishida. The 64-year old former foreign minister was once seen as an indecisive moderate. Of late, however, he has shifted to a security and diplomatic hawk as he seeks support from influential conservatives like Abe.

Kishida calls for a further increase of Japan's defense capability and budget and vows to stand up to China in tensions in the Taiwan Strait and Beijing's crackdown on dissent in Hong Kong.

On the economy, Kishida calls for a new capitalism of growth and distribution to narrow income gaps between the rich and the poor that have been worsened by the pandemic. He pledges to promote clean energy technology to turn climate change measures into growth and proposes a hefty economic recovery package.

However, at latest count,Kono's lead in surveys is significant: A Kyodo news agency poll showed on Saturday that 48.6 per cent of grassroots party members surveyed supported Kono, followed by Kishida's 18.5 per cent, Takaichi's 15.7 per cent and 3.3 per cent for Noda.

The elections will be held on September 29.