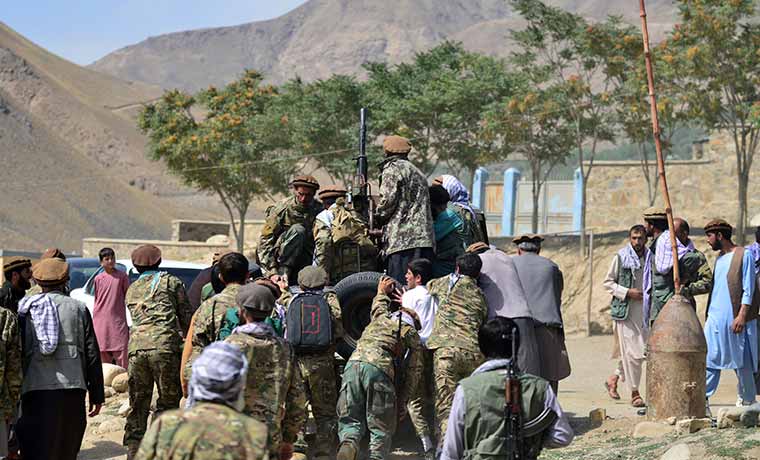 Militiamen loyal to Ahmad Massoud, son of the late Ahmad Shah Massoud, push a vehicle during a training exercise, in Panjshir province, northeastern Afghanistan, Monday, Aug. 30, 2021. The Panjshir Valley is the last region not under Taliban control following their stunning blitz across Afghanistan | AP

On Friday, the battle for Panjshir Valley raged on as anti-Taliban fighters said they battled to repulse a "heavy" Taliban assault, days after peace talks broke down.

However, early unverified reports claimed the valley had already fallen to the Taliban. Reuters cited Taliban sources as saying they had taken full control of Afghanistan including the Panjshir Valley. The report noted incidents of celebratory gunfire in Kabul as a result. A Twitter account claiming to represent the Panjshir Valley fighters denied the reports as untrue.

"Fahim Dashti, spokesman for the Resistance Front: Panjshir is on its feet, do not be deceived by propaganda. Auxiliary forces have been sent to all battle lines and heavy losses have been inflicted on the enemy," a post by a popular resistance handle @PanjshirProvin1 read.

Afghan news outlet TOLONews quoted a resistance member saying the Taliban had attacked from four directions but were repelled. The source said "hundreds" of enemy forces had been killed. The Taliban, however, denied any losses and claimed they had advanced into Panjshir's Paryan district from Warsaj in Takhar and Kiran Wa Manjan in Badakhshan.

Former Afghan Vice-President Amrullah Saleh, who has claimed to be the caretaker President of Afghanistan following Ashraf Ghani's fleeing of the country, tweeted saying the Taliban were committing war crimes by blocking humanitarian access to Panjshir.

Saleh's tweet from his verified account came after the initial reports of the loss of Panjshir started trickling in.

The RESISTANCE is continuing and will continue. I am here with my soil, for my soil & defending its dignity. https://t.co/FaKmUGB1mq

Following initial reports that he had left the valley, he released a video message calling these baseless. "The resistance is not going to surrender, it's not going to bow to terrorism, it is going to continue. There are difficulties, but I have not fled, I have not escaped."

Former Afghan President Hamid Karzai has called for an end to the fighting and for peace talks.