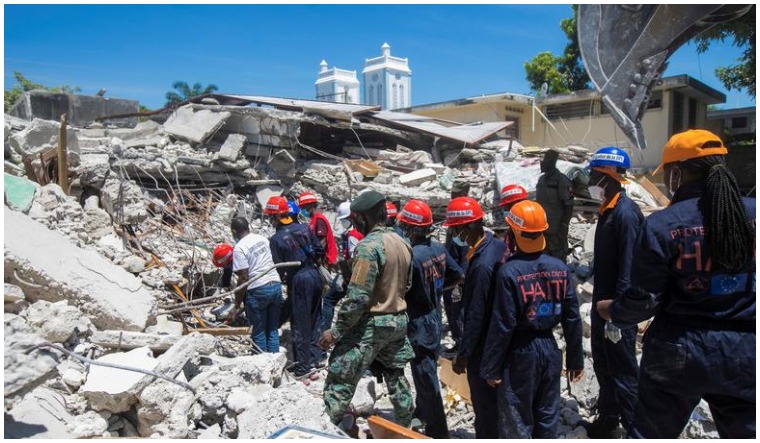 Members of a rescue and protection team clean debris from a house after a 7.2 magnitude earthquake in Les Cayes | Reuters

Haiti was struck by a 7.2 magnitude earthquake on Saturday. According to the country’s  Civil Protection Agency, as of Sunday, 1,297 people had died in the aftermath of the quake.  Thousands of structures crumbled. Frantic rescue efforts are on, ahead of a potential deluge from an approaching storm. Saturday's earthquake also left at least 5,700 people injured, with thousands more displaced from destroyed or damaged homes. After sundown Sunday, Les Cayes was darkened by intermittent blackouts, and many people slept outside again, clutching small transistor radios tuned to news, terrified of the continuing aftershocks.

The US responded quickly and sent in an earthquake disaster response team. They are being joined by a 65-person urban search and rescue team to assist in search operations, sent by USAID. Several members of Cuba's 253-member health care mission to Haiti were on the scene as well.  "We have started to send medications and medical personnel to the facilities that are affected," Prime Minister Ariel Henry told CNN.

The devastation could soon worsen with the coming of Tropical Depression Grace, which is predicted to reach Haiti on Monday night. The civil protection agency said Haitians must expect strong winds, heavy rain, rough seas, landslides and flooding. The quake centred about 125 kilometres west of the capital of Port-au-Prince nearly razed some towns and triggered landslides that hampered rescue efforts in a country that is the poorest in the Western Hemisphere. It already was struggling with the worsening poverty, the coronavirus pandemic, the political uncertainty following the July 7 assassination of President Jovenel Moïse and a wave of gang violence.

In a scene widely repeated across the quake zone, families salvaged their few belongings in Les Cayes and spent the night on a soccer field. Underlining the dire conditions, local officials had to negotiate with gangs in the seaside district of Martissant to allow two humanitarian convoys a day to pass through the area, the UN Office for the Coordination of Humanitarian Affairs reported.

The agency called Haiti's southern peninsula a "hotspot for gang-related violence," where humanitarian workers have been repeatedly attacked.

The agency said the area has been “virtually unreachable” over the past two months because of roadblocks and security concerns. Agency spokeswoman Anna Jefferys said the first convoy passed through Sunday with government and U.N. personnel. She added that the UN's World Food Program plans to send in food supplies via trucks Tuesday.

“We salute the dignity, the resilience effort of the victims and their ability to start over,” PM Henry, who declared a month of emergency for the country told AP.

"From my observations, I deduce that Haitians want to live and progress. Let us unite to offer these people a living environment conducive to development," PM Henry said.

The country of 11 million people received its first batch of coronavirus vaccines from the US last month.

Small planes from a private firm and the Florida-based missionary service Agape Flights landed at the Port-Au-Prince airport Sunday carrying about a half dozen injured from the Les Cayes area.