CPEC, rare earths: With US out, China set to scale up ambitions in Afghanistan 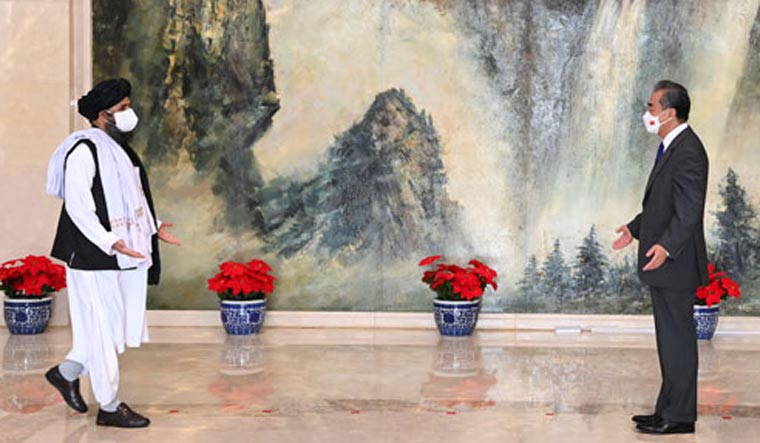 Ever since the Taliban forces began pouring into Kabul on Sunday afternoon even as the US continued evacuating its embassy, memes began to flood Twitter.

Numerous Twitter users began to share a collage showing in one frame the US evacuating its embassy in Saigon in 1975, leading to the reunification of Vietnam, and the other frame showing US Army helicopters flying from the embassy in Kabul on Sunday.

Supporters of the Republican party, ex-US military personnel and ordinary social media users have called the fall of Kabul an unprecedented humiliation for the US as a superpower.

China's English tabloid Global Times on Monday referred to the humiliation of the US in Afghanistan. The article also talked of China's interest in 'post-war' reconstruction in Afghanistan.

The use of the term 'reconstruction' appeared interesting since Afghanistan has been under reconstruction ever since the US invaded the country in the aftermath of the 9/11 attacks in 2001. The use of the term appeared aimed at projecting China's interest in becoming a factor in Afghanistan's politics using the development plank, a strategy China adopted previously, particularly in Africa.

On July 28, China's Foreign Minister Wang Yi met a Taliban delegation led by Mullah Abdul Ghani Baradar, one of the senior-most figures in the group, in Beijing. While Beijing had engaged with the Taliban previously, the publicity given to the meeting was interpreted as being unusual.

Other than the usual diplomatic platitudes, Wang called the Taliban "an important military and political force in Afghanistan" and a group that "is expected to play an important role in the country's peace, reconciliation and reconstruction process".

For his part, Baradar said the Taliban "hopes that China will be more involved in Afghanistan's peace and reconciliation process and play a bigger role in future reconstruction and economic development.” He added “The Afghan Taliban will also make its own efforts toward fostering an enabling investment environment.”

The geography and BRI

China shares a small border with Afghanistan called the Wakhan Corridor that is just 210km long and between 20 km and 60 km wide. While the length of the border may appear insignificant, its location is what makes Wakhan crucial in geopolitics.

The Wakhan Corridor links China's restive Xinjiang province with Afghanistan's Badakshan province, with Tajikistan to the north and Pakistan's Khyber Pakthunkhwa and Kashmir to the south. The mountainous terrain in the region had made the Wakhan Corridor a difficult place for building road networks.

However, its location is crucial for the security and viability of the China-Pakistan Economic Corridor (CPEC), a key part of China's larger Belt Road Initiative (BRI). An article by Australia's Lowy Institute explained the significance of Wakhan as "The port of Gwadar in Pakistan marks the beginning of this corridor (CPEC), and the tip of the Wakhan marks entry point for CPEC into China."

The Wakhan Corridor has been a route used by Uighur militants who are opposed to Chinese rule in Xinjiang. China has previously expressed fears the Taliban-controlled territory could be used by Uighur groups such as the East Turkestan Islamic Movement (ETIM). In fact during his meeting with Baradar, Wang had said, "We hope the Afghan Taliban will make a clean break with all terrorist organisations including ETIM (East Turkestan Islamic Movement) and resolutely and effectively combat them to remove obstacles, play a positive role and create enabling conditions for security, stability, development and cooperation in the region."

Securing the Wakhan Corridor would help China control the activity of Uighur militants, while also ensuring the security of CPEC. Multiple projects linked to CPEC have been attacked in Pakistan in recent years. The CPEC, which is a network of road and rail links, is being built at an estimated cost of $62 billion. CPEC is intended to give China land access to the Arabian Sea, boosting trade prospects to the Middle East, Africa and Europe by cutting travel time.

China's economic profile in Afghanistan has been subdued, when compared with its image elsewhere. A report by the US Brookings Institute in 2020 noted, "China’s economic investments in Afghanistan

remain small and well below their potential. In 2017, out of its $879 million worth of exports, Afghanistan exported a meager $2.86 million of goods to China, a number that has not grown substantially since and is well below Afghanistan’s $411 million exports to India. China, meanwhile, exported $532 million to Afghanistan that year."

After the fall of the Taliban in 2001, one of the key projects China was involved in was to develop a copper mine at Mes Aynak in Logar province. A Chinese company won a 30-year lease in 2008 worth $3.5 billion to develop the mine to extract copper. The mine is believed to have the world's second-largest copper deposit, valued at $50 billion. Progress on the project has been very slow, with the previous Afghan government even mulling legal action against the development consortium. However, the deal with the Chinese consortium remains in effect.

Another Chinese project in Afghanistan that has made little progress is a contract to develop three oilfields in Faryab and Sar-i-Pul. China National Petroleum Corporation (CNPC) won a $400 million bid to drill the oilfields for 25 years in 2011. The Brookings Institute report noted, "Chinese government officials and experts on Afghanistan have confessed that China sought those bids simply to pre-empt other countries from gaining the concessions, while expecting full well it would not start developing its concessions for years to come due to insecurity and the corruption of the Afghan government."

The return to power of the Taliban may well prove a catalyst to boost these projects. Then, there are prospects of future projects.

Afghanistan is believed to have large deposits of gold, iron, copper, zinc, lithium and other rare earth metals, valued at over $1 trillion. "Afghanistan may hold 60 million metric tons of copper, 2.2 billion tons of iron ore, 1.4 million tons of rare earth elements (REEs) such as lanthanum, cerium, neodymium, and veins of aluminium, gold, silver, zinc, mercury..." an analysis in The Diplomat in 2020 said.

Various rare earth elements are used for making key components of phones, cameras, computer disks, TVs and other equipment. They also have applications in clean energy and defence industries.

Afghanistan has vast reserves of lithium in provinces such as Ghazni, Herat and Nimroz. Lithium is a key component in building the lithium-ion batteries that power everything from mobile phones to electric vehicles to new generations of submarines. A Bloomberg New Energy Finance Limited report in 2020 noted China led the world's lithium-ion battery supply chain market, given its dominance of raw material mining and refining.

China potentially getting control of untapped deposits of lithium and rare earths in Afghanistan would prove a major advantage for Beijing in its evolving competition with the US and Europe for resources. In 2019, the US imported 80 per cent of its rare earth minerals from China, while the EU states got 98 per cent of these materials from China.