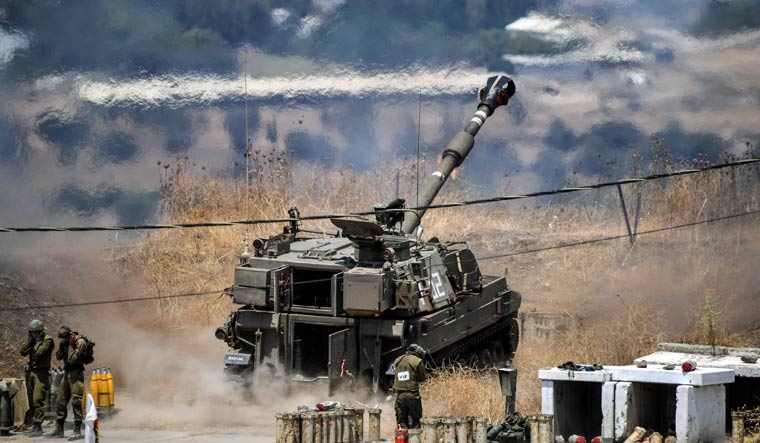 Lebanese militant group Hezbollah said it launched dozens of rockets on Friday at the disputed Shebaa Farms district, which drew retaliatory strikes from Israeli forces for a second straight day. It is the first time since 2019 that Hezbollah has directly claimed an attack on Israel.

Israeli fighters on Thursday had launched air raids on neighbouring Lebanon. The Hezbollah in a statement said, “The Islamic Resistance shelled open territory near positions of Israeli occupation forces in the Shebaa Farms with dozens of rockets."

Israeli forces said the airforce is striking the launch sources in Lebanon. The Israeli army also fired artillery and shells at areas in Lebanon controlled by Hezbollah.

Israel's defence minister warned Thursday that his country is prepared to strike Iran, issuing the threat against the Islamic Republic after a fatal drone strike on an oil tanker at sea that his country blamed on Tehran. Sirens blared across the Golan Heights and Upper Galilee near the Lebanon border Friday morning. Hezbollah said it fired 10 rockets, calling it retaliation for Israeli airstrikes the day before.

Those strikes were in retaliation to rocket fire from south Lebanon, which was not claimed by any group. Shebaa Farms is an enclave where the borders of Israel, Lebanon and Syria meet. Israel says it is part of the Golan Heights, which it captured from Syria in 1967. Lebanon and Syria say Shebaa Farms belong to Lebanon, while the United Nations says the area is part of Syria and that Damascus and Israel should negotiate its fate.

The escalation comes at a sensitive time in Lebanon, which is mired in multiple crises including a devastating economic and financial meltdown and political deadlock that has left the country without a functional government for a full year. Hezbollah's response, rocketing open fields in a disputed area rather than Israel proper, appeared calibrated to limit any response. Ten of the remaining 16 rockets were intercepted by the defence system known as the Iron Dome. It is also a politically sensitive time in Israel.

Israel's new eight-party governing coalition is trying to keep the peace under a fragile cease-fire that ended an 11-day war with Hamas' militant rulers in Gaza in May. Israel has long considered Hezbollah its most serious and immediate military threat. It estimates the group possesses over 130,000 rockets and missiles capable of striking anywhere in Israel. Hezbollah later issued a statement saying that the rockets were fired from remote areas, adding that the fighters were stopped in Shwaya on their way back.

Mohammed Tahhan was shot dead by Israeli troops along the Lebanon-Israel border in May during a protest in support of Gaza during this year's Israel-Hamas war.

The United Nations, which maintained a peacekeeping force in south Lebanon regards Shebaa Farms district as part of the Syrian Golan Heights, which has been occupied by Israel since 1967 and annexed in 1981. The district is, however, claimed by Lebanon and Hezbollah.