After aerial strikes from US, Taliban face bombardment from Afghan Air Force 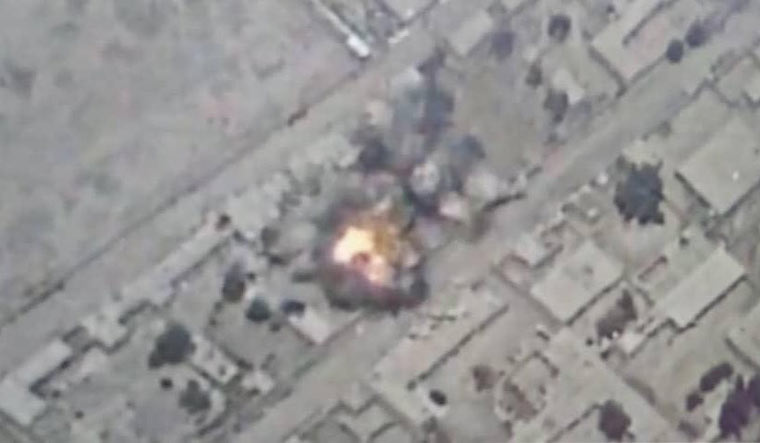 A photo of one of the air strikes, released by Afghanistan's Ministry of Defence

After months of ceding territory to the Taliban, Afghanistan has struck back. Air strikes conducted by the Afghanistan Air Force have reportedly killed over 30 Taliban members, the army said on Thursday.

“18 Taliban terrorists were killed 28 others were wounded in airstrikes conducted by #AAF in vicinity of Alishing district, Laghman province, yesterday,” Afghanistan’s ministry of defence tweeted on Saturday,

It added that one vehicle, one mortar and some weapons and ammunition were also destroyed.

The MoD said 13 Taliban members had been killed and nine others wounded the day before, in air strikes conducted in the Ghazi-Abad district of Kunar province. Seven vehicles were destroyed along with caches of weapons and ammunition.

Another airstrike in Helmand killed nine, the MoD said.

The strikes come days after the US conducted its own aerial assault on the Taliban in Kandahar. The Taliban said the air strikes violated the signed peace agreement and would have “consequences”.

Local journalist Bilal Sarwary claimed the airstrikes killed five Taliban terrorists, noting that they were carried out over several days.

The intensifying campaign against the Taliban comes as Afghanistan’s own forces are stretched thin.

India on Saturday asked its citizens in Afghanistan to exercise utmost vigilance and caution in view of the "dangerous" security situation in several of its provinces, and warned that Indians additionally faced a "serious threat of kidnapping".

In a fresh advisory, the Indian embassy said the terror groups operating in Afghanistan have escalated violent activities including the targeting of civilians and asked the Indians not to travel outside the main cities.

It said the new advisory reiterates the earlier one issued on June 29 which remained valid for all.

The embassy also advised the Indian media personnel travelling to Afghanistan to establish contacts with it for a better assessment of the risks involved, and cited "recent tragic events", in a reference to the killing of Indian photojournalist Danish Siddiqui in Kandahar on July 16.

"Security situation in Afghanistan remains dangerous in several provinces. Terror groups operating in Afghanistan have escalated violent activities including the targeting of civilians. Indian nationals are not exceptions, and they additionally face a serious threat of kidnapping," it said.

This advisory reiterates advice of June 29 which remains valid for all," it added.

The fresh advisory came amid a spike in terror attacks in Afghanistan following the withdrawal of the majority of American troops from the country. The US plans to complete the drawdown by August 31, ending nearly two-decade of its military presence in the country.

In the advisory, the embassy asked all Indians visiting, staying and working in Afghanistan to exercise "utmost vigilance and caution" with regard to their security and specifically called for restricting all types of non-essential travel.

"All Indian nationals visiting, staying and working in Afghanistan are advised to exercise utmost vigilance and caution with regard to security at the workplace, place of residence and also during movement to their places of work," it said.

As the situation deteriorated in Afghanistan in the last few weeks, India has been in touch with leading international players as well as the Afghan government on the overall developments in the country.

External affairs ministry spokesperson Arindam Bagchi on Thursday said that India supports the government and the people of Afghanistan in realising their aspirations for a peaceful, democratic and prosperous future that protects the interest of all sections.

India has been a major stakeholder in the peace and stability of Afghanistan. It has already invested nearly $3 billion in aid and reconstruction activities in the country.

India has been supporting a national peace and reconciliation process which is Afghan-led, Afghan-owned and Afghan-controlled.